7,000,000 tonnes of British Shipping Protected in the Gulf

MORE THAN seven million tonnes of British shipping has been escorted through the Strait of Hormuz by Royal Navy warships in recent months, the service has revealed. Said to be the equivalent of 20 wartime convoys, the Herculean task has fallen to a small group of British warships working flat out. From early July to September 2, 90 British merchant ships totalling six million tonnes were shepherded from Iranian harassment first by the Type 23 frigate HMS Montrose, which passed through the narrow waterway 38 times.

Montrose was on station for 64 days and was responsible for the safe passage of 60 British vessels carrying 5,000,000 tonnes of cargo through the Strait. Her captain, Commander Will King, likened the effort to “policing an area twice the size of Wales with a single squad car”. The frigate hit the news with her intervention to end the harassment of the tanker British Heritage on July 10, moving at full speed to position herself between the Iranian Revolutionary Guards Corps and her charge.

However, nine days later, when escorting other vessels some distance away, she was unable to prevent the seizure of the British-flagged Stena Impero in spite of all effort to reach the impeded tanker. The Impero was released on September 27.

Later, the Type 45 destroyer Duncan arrived in theatre to support the frigate. The pair recently convoyed the tankers Hellespont Pride and Moonbeam and container ship Brighton on Montrose’s final patrol before undergoing a short period of maintenance in Bahrain. Despite a reduction in tension, the flotilla was regularly shadowed. The warships reported that every transit was being observed by Iranian forces; spotting drones, receiving radio broadcasts, and often being approached by small boats – 115 interactions by early September.

Now, HMS Kent has taken up the lion’s share of duties – the frigate escorting 800,000 tonnes of shipping in just three weeks. Duncan has since returned home after seven months at sea but had protected 1,287,200 tonnes – 26 British-flagged ships – on 29 runs in a month. Another Type 45, Defender, is also in the region.

Commodore Dean Bassett, the senior Royal Navy officer in the Middle East, stated: “Our response is a direct result to the threat from Iran. If Iran sticks to international law and stops its aggressive action, there is no need for warships to be here in force.” 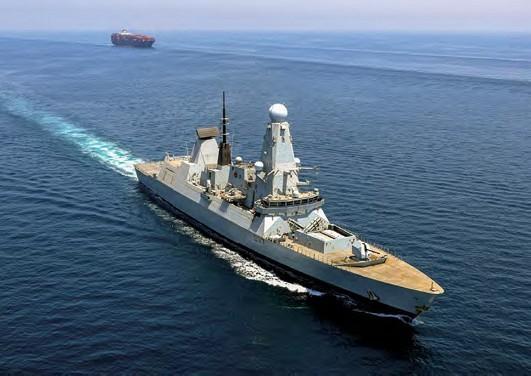