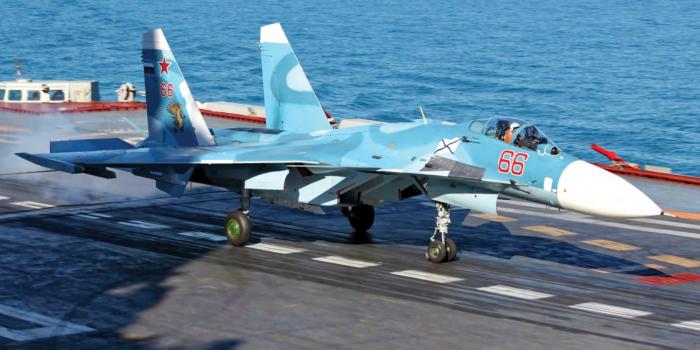 Su-33 ‘66 Red’ was the eighth Su-33 to be modernized via installation of the SVP-24 system during its overhaul at the 20th ARZ. It flew for the first time after overhaul in June 2016. Sergey Kuznetsov

THE RUSSIAN MILITARY stepped up its involvement in Syria on November 15, 2016, when pro-Assad forces launched intensive attacks on Syrian rebels around eastern Aleppo. As well as missile strikes from land and sea, aircraft were flown from the Russian aircraft carrier Admiral Kuznetsov, stationed off the coast. Initial footage released by the Russian Ministry of Defense (MoD) suggested that only Su-33s were launched from the carrier, and most of these carried an exclusively air-to-air load. Subsequently, Russian TV reports showed Su-33s on deck with free-fall FAB-500M-54 high-explosive bombs on the centerline.