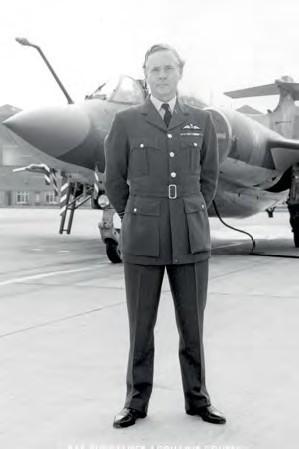 John Price as a Group Captain, with a Buccaneer in the background.
(IMAGES VIA GRAHAM PITCHFORK)

WE ARE sad to report that Air Vice-Marshal John Price died on April 25, aged 89, writes Graham Pitchfork. He flew jet fighters during the Korean War and helicopters on missions in Borneo and Northern Ireland. During four separate appointments in the MoD he filled senior positions responsible for air operations.

After leaving school in Birmingham, in 1949 he gained a cadetship to the RAF College, Cranwell, Lincs, where he trained as a pilot. He first flew Vampires in West Germany before beginning an attachment to Royal Australian Air Force (RAAF) to fly Meteors on operations in Korea.

In December 1952 he joined 77 Squadron based at Kimpo in South Korea by which time it was clear that in air combat the Meteor was no match for the Mikoyan-Gurevich MiG-15 flown by the opposition. Armed with rockets and 20mm cannons it was more effective in the ground attack role, and Price flew many missions striking road convoys, supply dumps and enemy ground positions. At the end of his six-month attachment he was mentioned-in-despatches.

He returned to West Germany to fly the Venom, becoming the flight commander on 98 Squadron at Fassberg. In July 1954 he headed back to Australia as a tactics and gunnery instructor at the RAAF fighter school at Williamtown, NSW. He later became a flight commander on 75 Squadron RAAF flying the Meteor.

After his return to the RAF in August 1956 he undertook a series of ground postings. In October 1964 he converted to helicopters before leaving for Singapore to take command of 110 Squadron flying the Whirlwind. The unit was heavily involved in supporting army operations during the Indonesian Confrontation in Borneo and it was frequently detached to Kuching in Sarawak, to Brunei and to Labuan. Price and his pilots flew re-supply sorties to remote landing strips in forward positions.

After serving as the personal staff officer to the Chief of Air Staff, ACM Sir John Grandy, he returned to helicopter work in 1970 when he assumed command of 72 Squadron flying the Wessex. The unit was based in Northern Ireland to provide support for the security forces. At the end of his tour he was appointed OBE.

Further work in the MoD followed before he took command of RAF Laarbruch in West Germany in December 1976, the home of two Buccaneer strike/ attack squadrons and a Jaguar reconnaissance unit. After 15 years flying helicopters, Price completed a series of refresher courses to allow him to fly all the roles flown by his crews. After two years, when he completed his tour, he wrote: “I could not have had a more wonderful last flying tour”. Shortly after leaving Germany he was advanced to CBE. He retired from the RAF in 1984. He was a strong supporter of the Aircrew Association and the Buccaneer Aircrew Association.