Angels on my side 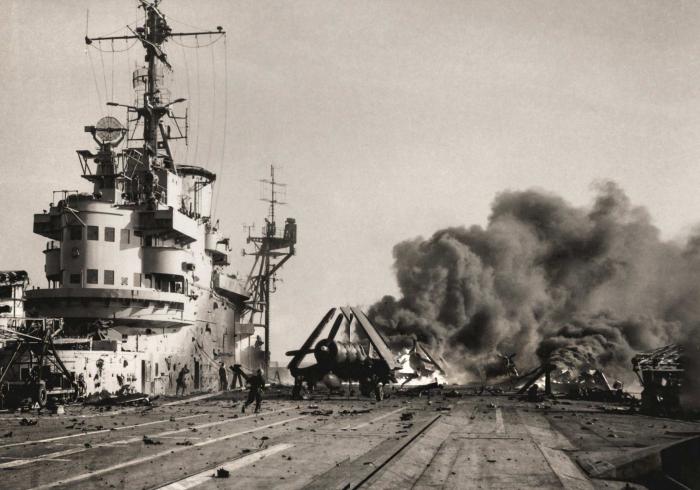 DAMAGE CONTROL PARTIES ON HMS ‘FORMIDABLE’ AFTER A KAMIKAZE CRASHED ON THE FLIGHT DECK OFF THE SAKISHIMA ISLANDS. NOTE THE SPLINTER DAMAGE TO THE ISLAND AND THE WRECKED CORSAIRS
IWM A29313

The atmosphere on the afternoon of May 9, 1945 was tense. The war in Europe had ended the day before but, half a world away, the fight was on. The sky was grey with foreboding as Fleet Air Arm pilot Keith Quilter was strapped into the cockpit of his Corsair, awaiting the signal to roar off the flight deck of HMS Formidable.

A lone Japanese fighter appeared out of the cloud. The sirens sounded, a red flag waved, and 23-year-old Quilter rapidly released himself, threw back the cockpit hood, clambered out of his seat and ran crazily to the steps that took him below deck. At the same time, the Japanese pilot aimed his screaming Mitsubishi Zero at the 740ft-long, 22,600-ton ‘Formy’.

When the kamikaze had completed his raid, Quilter returned up top. He realised a moment’s delay would have brought his death, as he discovered the remains of many aircraft, including his own, smouldering, forlorn and wrecked in carcass-like tangles. “I have never moved so fast in my life”, he recalled.