The glider must have been off course for me to end up in the Alps but, either way, I must complete the mission

Smaller than most tanks, the AMD 35 is perfect for peeking around corners 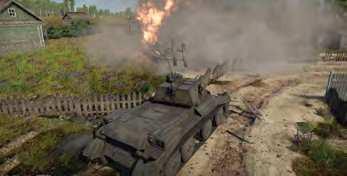 AS Valentine’s Day is approaching, I decided to pit history’s most famous lovehate pair of nations – Britain and France, at one turn bitter enemies, the next faithful allies – against each other in War Thunder.

The opening British tanks available to me were the A13 Mk 1, also known as the Cruiser Mark III, and the Light Tank Mark VII, better known as the Tetrarch Mk. Despite their key position as some of the first tanks available in the game, in reality, neither of these armoured vehicles were mass-produced, with only 65 A13s and less than 200 Mark VIIs constructed before manufacturing ceased. I found initial success, thanks to the quality of both of their main cannons, both being armed with the QF 2-pounder, with my first incursion resulting in multiple enemy vehicles being knocked out.