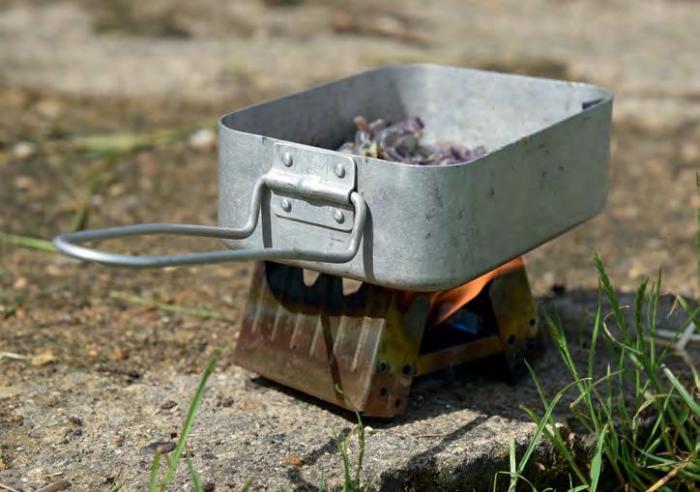 Online research suggests that it is debatable as to whether it was Napoleon Bonaparte, Frederick the Great of Prussia or Claudius Galen, chief physician to the Roman army who first observed that “an army marches on its stomach.” While the origin of this proverb, initially recorded in English during the early 20th century, may be worthy of debate, its truth is not. It is undeniable that without food and water, a military unit cannot function. As a result, armies have spent time and money providing their soldiers with food and the means to cook and eat it.

The British Army is no exception and provided its soldiers with a mess kit that was designed to be both compact and use its space as effi- ciently as possible. Central to this is the mess tin designed to be used over portable cooking stoves or the embers of open fires.

Essentially, it is a portable saucepan primarily used for boiling and heating but also suitable for frying. The British soldier was issued a pair of nesting, rectangular-shaped tins of similar depth. One fits neatly inside the other and both have spacesaving folding handles that are bracketed to the tins. The tins were originally made of tin-plated steel but were subsequently produced in an aluminium-alloy material.

They were originally intended to be stowed within the 1937 pattern haversack and contain other small items of kit and rations. In this fashion the mess tin became a vital piece of equipment for the soldiers of World War Two, used for heating food as well as a plate to eat from, to boil water for tea, and to wash and shave in. Easily cleaned, they could be scoured with sand or gravel when water in the field was precious.

Later, following the issue of 1958 pattern webbing, soldiers would separate their mess tins, packing each tin with rations, washing kit, knife, fork and spoon combinations and ‘Hexy’ burners. Each was then stowed in the kidney pouches on their webbing. The ‘hexy-burner’ hexamine stove, is a military cooking stove that uses hexamine fuel tablets - officially hexamethyl- enetetramine or methenamine. The stove acts as a platform for the cooking vessel and a windbreak for such cooking. The windbreak part of the stove is designed to fold into a compact size that can be used to contain the fuel tablets.

The hexy burner has long been used by the British Army in conjunction with compo rations and boils water quickly especially when the larger mess tin is used as a lid over the smaller.

If you’ve ever had long days outside in the rain and wind, you’ll know that a brew helps keep spirits up.

In an issue that marks the 35th anniversary of the Falklands War, where soldiers were deployed in open country in the southern hemisphere’s winter, the combination of hexy burner, mess tins and compo ration packs would have enabled many a soldier to get a warming brew and keep hypothermia at bay. The 24-hour, Compo ration packs - rat packs - contained tea bags and tubes of condensed milk as well as food, matches, folding tin openers and packets of Spangles fruit sweets.

The hexy stove has now been replaced with a new stove using a more modern eco-friendly, ethanol-based ‘Fire Dragon’ fuel. The MoD requirement for the new stove was for it to boil half a litre of water in fewer than 11 minutes. Although time has caught up with the hexy burner and it is no longer issued to soldiers, it remains plentiful in army surplus and camping shops as do its hexamine fuel blocks. It’s fair to say that a hexy stove is more of a curiosity than a genuine collectable. The mess tins though are collectable; marked with a government arrow and dated, it’s the earlier the better for many people. The one pictured is dated 1953, so was probably part of the equipment issued to a national serviceman when it was new.

The popularity of them, and their compact design, also explains why there’s repro mess tins in lots of camping shops.

Well, what are you waiting for? Go and get a ‘wet’, white, two sugars, NATO (normal army tea order)…. 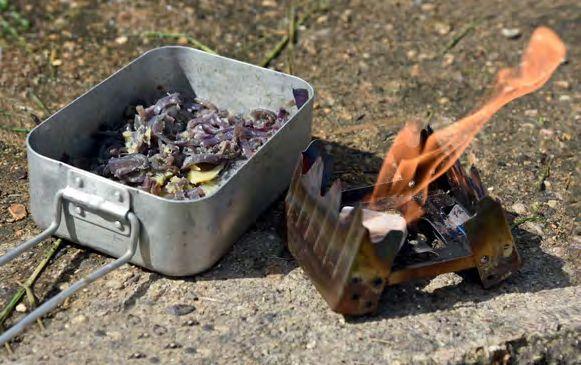