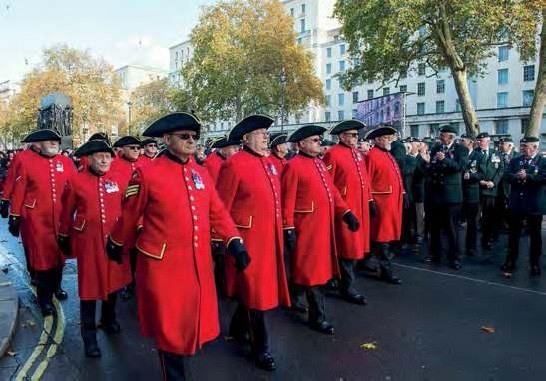 A MULTITUDE of commemorative events, ceremonies, vigils, digital releases and memorabilia have marked the 100th anniversary of the war’s conclusion both nationally and internationally. Massed events honoured all who served and sacrificed – regardless of Allied or Central Powers affiliation, Alex Bowers reports.

In the months, weeks and days leading up to Remembrance Sunday, commemorative acts have played out against a backdrop of the Hundred Days Offensive centenary, a campaign that began during the 1918 Battle of Amiens. It was marked this year with a ceremony held at Amiens Cathedral on 8 August – the 100th anniversary of the first day of the battle – and attended by HRH The Duke of Cambridge and the British Prime Minister Theresa May.

One week before the official Armistice commemorations, the sounding of a bugle – once owned by Wilfred Owen – marked the centenary of the war poet’s death. He was killed in action on 4 November 1918. Descendants and officials attended a wreathlaying ceremony, by his graveside in Ors, northern France. Elizabeth Owen, the widow of Wilfred’s nephew Peter, describing the occasion as „moving“. 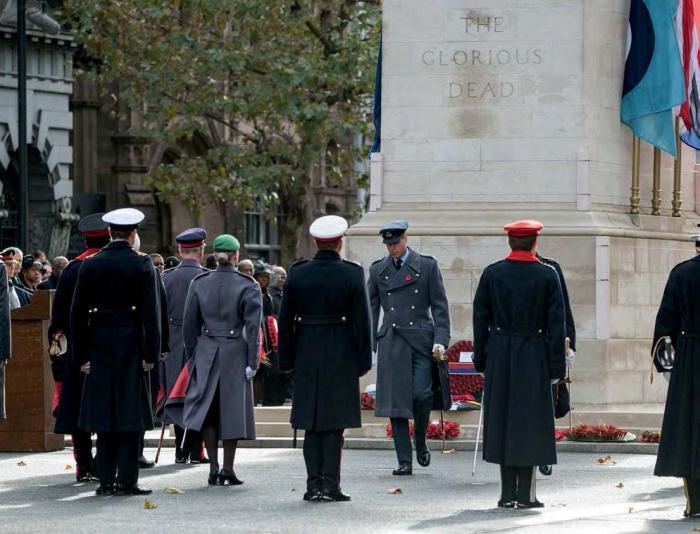 Meanwhile, at the Tower of London, 10,000 flames were lit in the surrounding empty moat – once home to 888,246 ceramic poppies in 2014 – each night for the week leading up to Remembrance Sunday. Every torch burned for four hours to represent the four years of conflict. The daily ceremony, was part of an eightday tribute entitled Beyond The Deepening Shadow: The Tower Remembers and was accompanied by a specially commissioned sound installation featuring poetry reading and choral music and was free to attend.

Governor of the Tower of London Dick Harrold expressed hope that its message focused not only on those who died but also on: „… those that were left behind, the bereaved and others who were affected by war.“

A similar event took place in Canberra, Australia, where 62,000 handcrafted poppies (representing each Australian killed in the Great War) adorned the Australian War Memorial in the run up to the main commemorations on the 11th.

Across what was formerly the Western Front, events small and large took place, many at the sites of infamous battles, with the Commonwealth War Graves Commission (CWGC) playing a vital role in acts of remembrance.

On 9 November Theresa May, her Belgian counterpart Charles Michel and French President Emmanuel Macron visited St Symphorien Military Cemetery in Mons, the final resting place of the first and last Commonwealth casualties of the First World War. The three world leaders visited the graves of British Pvt John Parr, killed on 21 August 1914; British Pvt George Ellison, who fell on 11 November 1918 at around 9.30am; and Canadian Pvt George Lawrence Price, who was struck by a sniper and died on 11 November 1918 at 10.58am, two minutes before the end of the war. Mrs May paid tribute to the war dead, describing them as „staunch to the end against odds uncounted“.

The India Embassy to France hosted a ceremony dedicated to the 9,300 Indian soldiers who sacrificed their lives in the European theatre of the First World War at Charmes Military Cemetery in the Vosges region, eastern France, on 10 November. That same night, 255 Commonwealth War Graves Commission maintained sites in the Arras area were lit up by local communities to show respect for all who fought and died, with participants receiving their own candle to lay on a headstone of their choice. 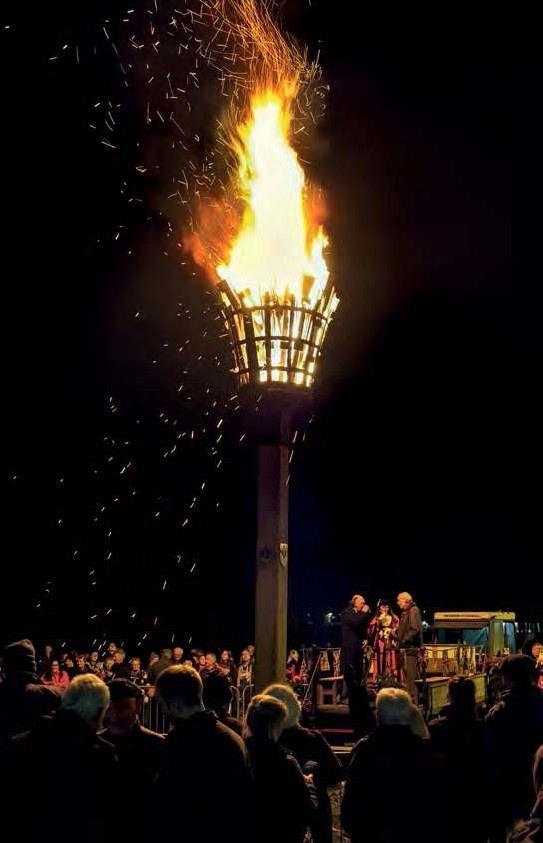 Beacons, such as this in Tenterden, Kent, were lit to mark the Armistice.
(ALAN CROTTY) 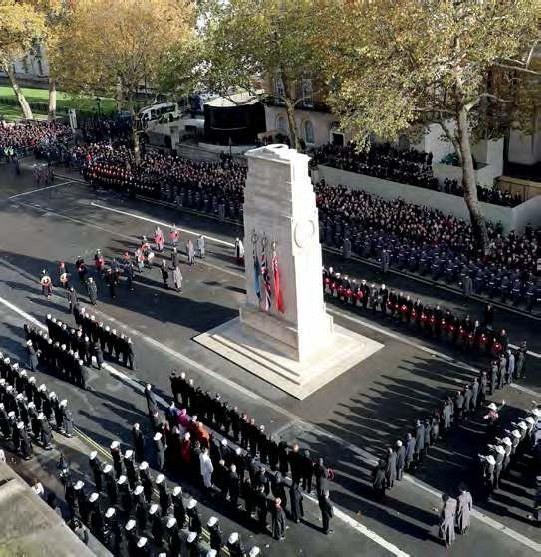 At well-known cemeteries and memorials across France and Belgium, including Thiepval, Vimy, Villers-Bretonneux, Tyne-Cot and the Menin Gate, special Remembrance Sunday services began at 11 o’clock, the precise time the guns fell silent throughout Europe. Around 70 world leaders, including Presidents Donald Trump of the USA and Vladimir Putin of Russia, and Germany’s Chancellor Angela Merkel, gathered at the Arc de Triomphe in Paris for the occasion, both mourning and reflecting on their respective country’s sacrifices during the conflict.

In the UK, each capital city marked the occasion in evocative manner. At Cardiff Castle, more than 6,000 crosses and commemorative markers were planted to create a ‘Field of Remembrance’, opened earlier in the week by Carwyn Jones, the First Minister of Wales, and Terry Whittles, National Chairman of the Royal British Legion. Meanwhile, a service at the Belfast City Hall cenotaph was attended by Northern Ireland Secretary Karen Bradley and the Republic of Ireland’s deputy premier Simon Coveney. In Scotland, the names of 134,712 Scots who died as a result of the conflict were projected onto the front of The Scottish Parliament as part of a rolling visual display. The act of commemoration took seven hours to complete, running from 5pm until midnight.

A focal point for much of Britain’s commemorations, however, took place at the Cenotaph in Whitehall, as well as a service held at Westminster Abbey later in the day. Around 10,000 members of the public – chosen by ballot – took part in a procession past the world-renowned memorial from 12.30pm followed the more than 10,000 veterans and their descendants representing various service associations from more recent conflicts as well as those who fought both world wars. HRH the Duke of Wales, accompanied by German President Frank-Walter Steinmeier, laid a wreath in an act seen by many as an extraordinary gesture of reconciliation between the two nations.

A national and international initiative entitled Battle’s Over: A Nation’s Tribute also saw a series of events throughout the day including more than 1,000 individual Pipers in Britain and around the world playing the traditional Scottish lament, Battle’s O’er. One thousandplus Beacons of Light were ignited to symbolise the end to the darkness of war while bells were rung in more than 1,000 cathedrals and churches in special recognition of the hundreds of bellringers who died in the fighting. Other countries involved in the project included Ireland, France, Belgium, Germany, Australia, New Zealand, Bermuda, Canada and the USA. 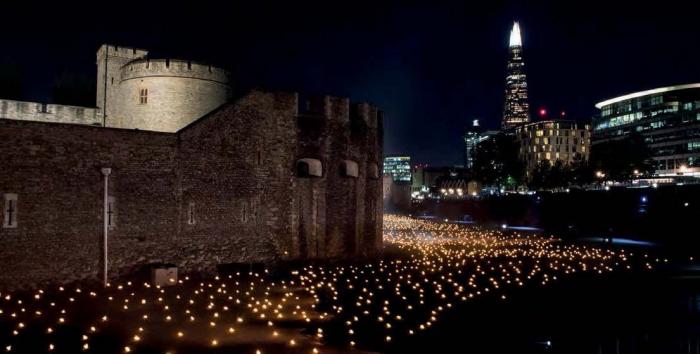 Though the Armistice brought hostilities to an end a century ago, a formal agreement wasn’t made until the Treaty of Versailles was signed on 28 June 1919, exactly five years after the assassination of Archduke Franz Ferdinand. The centenary of the treaty signing will be marked in 2019. 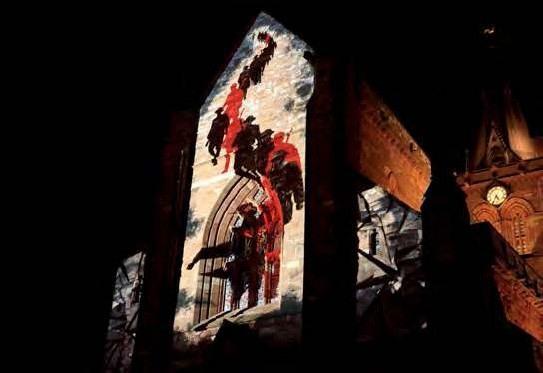 Smarden, Kent, England, hosted a commemorative event featuring static displays, poetry readings and a performance created by the local theatre organisation. Alex Ferris, chairman of the Smarden Local History Society and chief organiser of the event, said: „The village of Smarden has come together to commemorate and remember the men who fell, those who returned and their families and friends who waited back at home.“

Llanfihangely Creuddyn, Ceredigion, Wales, has the distinction of being a ‘Doubly Thankful’ Village. The title refers to a community with no reported casualties from either the First or Second World War. No bells rang out to mark the occasion, but the village quietly reflected on the ‘thankful’ return of loved ones from war 100 years and 73 years ago respectively.

Kirkwall, Orkney, Scotland, saw the side of St Magnus Cathedral beautifully transformed into a 22-minute long projection of First World War-stylised vignettes, depicting some of the key events of the island’s military history. The Great War: An Orkney Memorial Experience was commissioned through the Kirkwall Townscape Heritage Initiative, funded by the Heritage Lottery Fund, and created by Playdead, an award-winning motion graphics studio based in Glasgow.

Murlough Bay, Northern Ireland, joined 31 other beaches taking part in the ‘Pages of the Sea’ project, headed by film-maker Danny Boyle. At 8.30am on 11 November 2018, the portrait of John McCance from Dundrum, County Down – a casualty of the First World War – was cut into the sand, eventually ‘washing away’ with the rising of the tide two hours later. Other locations included Folkestone in Kent where the image of Wilfred Owen was carved into the sand at a major departure point for troops serving overseas, and Coleraine where a portrait of Staff Nurse Rachel Ferguson – Queen Alexandra’s Imperial Military Nursing Service – was imprinted in the sands there. On Roseisle Beach in Scotland a depiction of Britain’s first black army officer, Second Lieutenant Walter Tull, was sculpted into the beach as part of the same act of national commemoration.