Awash on the Rhine

In the winter of 1919-20 almost 10,000 military vehicles ended up under water. Using archive photographs and reports Tim Gosling found out what happened 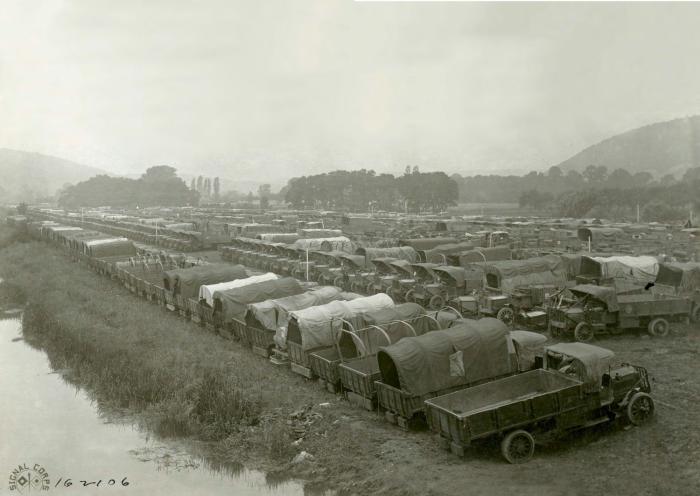 The back wheels of these Packard trucks are only a few feet from the edge of the river Ahr. In the second row are a pair of Packards which have no front axle at all! As a tributary of the Rhine, the river did not rise as significantly, but still enough to submerge the axles of all of these machines and the engines of a handful

Frustratingly, these albums cannot be viewed due to their fragile condition. Within the albums are reports, correspondence, charts, plans and 166 photographs showing how almost 10,000 military vehicles sold by the US Army in 1919 to the British company, Motor Organisations Ltd (MO), were seriously damaged by the flooding of the river Rhine in the winter of 1919-1920.

These albums were prepared under the direction of MO for a legal battle with the US Army, the circumstances of which have never before been completely told. The photographs used in this article come from local German photographers and Sgt J Jones of the US Army Signal Corps who was based in Coblenz and who recorded the life of the American occupying forces.

Following The armistice of November 11, 1918, the British, French, Belgian and United States armies occupied the Rhineland to ensure that the Germans followed the terms of the agreement. The US Third Army comprising 240,000 men in nine divisions occupied the area around the city of Coblenz up until July 1919 when they were disbanded with all but 8,400 men returning home.

Left behind were vast stocks of valuable supplies and equipment which had been brought to equip and feed the now departed army. A ‘Liquidation Commission’ was established to quickly get the best price for the sale of this equipment, the most valuable items of which were the motor vehicles, which having been left outside for over a year, were in poor condition.

The majority, 7,734, were stored on the riverbank at Neuendorf, the point where the Moselle and Rhine rivers meet in Coblenz (including an annexe about half a mile upstream), 1,850 were stored at Sinzig (about 20 miles downriver) and an unknown number were stored at Bitburg which was 26 miles away from the Moselle river. About five miles downriver from Coblenz was the supply depot at Bendorf which contained vast stocks of fuel and lubricants.

It was difficult to find a buyer for all of these vehicles but on October 1, 1919 the whole lot was bought by the syndicate of MO for £3,250,000 (approximately £160m in today’s prices). This syndicate comprised Sir Percival Perry (the head of Ford England) and Lt Col G W Parkinson (chairman of a large civil engineering company). Ten percent of the cost was to be paid up front with the balance paid in three equal installments over the next two years. It was agreed that the final sale price could be varied if the number or condition of the vehicles required reclassify cation.

Photographed from the railway bridge looking Westwards over the annexe park are lines of Packard trucks on the left and Liberty trucks on the right. American soldiers can be seen at work and it looks like they have set up a volleyball net by the tents

The intention was to move the vehicles into the abandoned US Army workshops which were made available as part of the deal, where they would be over hauled and then sold with the proceeds going to cover the next instalment. The syndicate had access to a large stock of surplus vehicles, parts, workshops and cheap German labour giving them a virtual licence to print money. What could possibly go wrong?

Before making the purchase, MO sought confirmation that the vehicles were safe, which the US Army having placed a guard upon them were happy to confirm. On December 1, 1919 representatives of MO arrived to inspect the vehicles but were shocked to hear from local residents that the location where they were stored had been subject to flooding every January without exception.

The American deputy town major accompanied the representatives of MO on an inspection and he confirmed that If the river rose by a depth of five metres all the vehicle parks except Bitburg would be flooded.

MO promptly contacted the American sales agent on December 11 asking for an alternative location to where the vehicles could be relocated, the assistance of American troops and five caterpillar tractors to move them.

The sales agent responded on December 14 to advise that MO could use some different land (but would have to pay compensation to the owners), with the US army on December 24 refusing the use of the tractors as, of the five caterpillars owned by the army of occupation, three were broken and two were doing urgent work elsewhere. They did not respond to the request to provide manpower. At this time the river had risen by 3.7m, time was running out!

Once aware of the situation MO began to move the vehicles. Despite the trucks having been left out in the open without any maintenance for more than a year, a group of British and local German employees managed to get several FWD and three Nash Quad trucks operational which they used to start towing the GMC ambulances and White trucks stored in the main park annexe (which was considered to be at the greatest risk of flooding) away from the water’s edge. 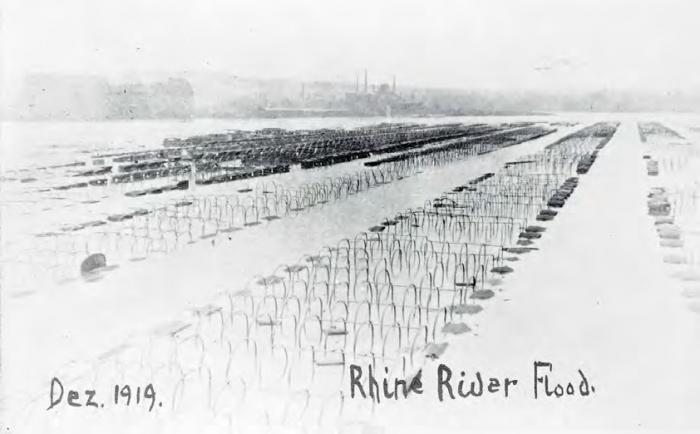 The chimney stacks in the distance show this photograph was taken in almost the same location. The flood is on its way down but it has already washed away the canvas tarpaulins for each truck body, but left behind the cab roofs

On midnight December 24, all but 11 of the German workers walked away from the site. Christmas was a holiday and by working on a holiday they risked a fine! 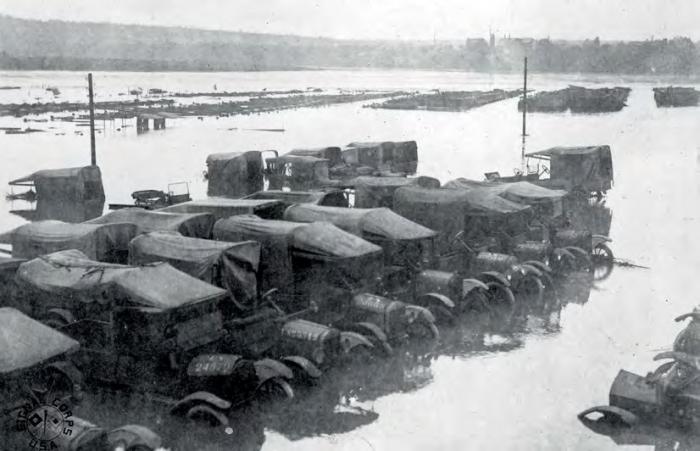 The water level is on the rise and most of these Model Ts would be winched to safety. The same could not be said for everything in the background which is disappearing under the water

Rather sensibly, the trucks and motorcycles stored at Bitburg were parked on top of a hill and missed the flood. The motorcycles have been organised by class, with class F, those which were very badly damaged parked on the left

The park at Sinzig contained 1,850 vehicles. This photograph was taken from a railway bridge which due to the great increase in water flow acted as a dam causing the park to flood. From right to left can be seen Packard trucks, a solitary Mack, Nash Quads, FWDs and then Fords

Some of the English workers did not turn up on Christmas day which left MO with just 13 employees and a sense of desperation as the water was three feet from the park and rising rapidly. Using the FWDs and Nash Quad trucks, some vehicles were hauled away and parked on higher ground, but the water was soon rushing into the park and the vehicles were becoming inundated.

By Boxing Day, the workforce had increased to 19 but received assistance from an unexpected source when a large number of US Army soldiers were drafted in to help and who started moving Cadillac and Ford cars out of danger.

Unfortunately, due to the rise in the flood waters the entrance to the main park was now inaccessible and no vehicles could be rescued from this location.

A visit to the park at Sinzig showed that many vehicles were sitting in water up to their axles but were not considered to be at high risk of further damage so these were left for the time being. Work carried on at the annex to the main park where winch cables were taken out in boats to the flooded trucks, connected and winched onto dry land.

These vehicles had their engines, gearboxes and axles drained and were marked with a large red cross. Another problem now occurred with the supply of fuel running low. Fuel tanks at the vehicle parks had been washed away and the fuel depot downstream at Bendorf had been devastated with tanker wagons and fuel drums also being washed away in the flood.

Additional fuel was bought from the US Army but this was in very short supply. The Americans were billeted in the workshops and provided vital manpower, but on December 29 their commanding officer withdrew them, giving no explanation why. The directors of MO thought that the situation could not get any worse, but they were wrong.

On January 10, 1919 the flood level had dropped to 3.6m but due to a rise in temperature which caused snow to melt upstream the water level rose again. On January 15, the flood reached 9.3m dropping back to 4m on January 27. This second flood was far more powerful and destructive than the first with most vehicles becoming completely submerged with some being swept away.

The vehicles at Sinzig which had escaped damage in the first flood were now inundated. Heavy frosts now caused damage to the engines and radiators and, where vehicles were free of the water, the frost had literally frozen them into the mud. The steering and brakes were also locked in place making recovery even more challenging. As the water finally receded the vehicles were removed to what was called the ‘New Park’, a storage area near the repair workshops. 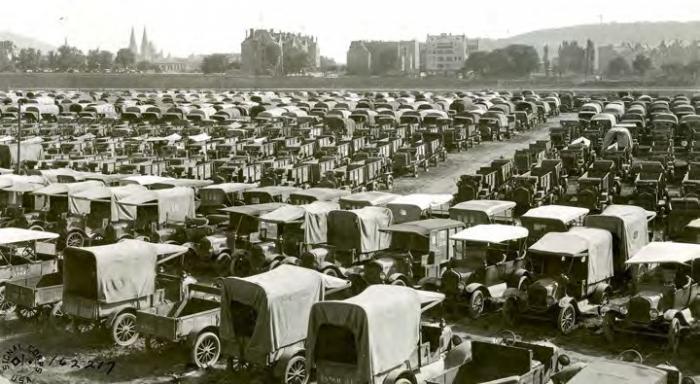 Standing on a slight rise at the annexe park are Model T Fords, while behind them are rows of FWD, Nash Quad and Liberty trucks. Soon these trucks would be completely submerged

It is hard to believe that this is the same location, but the church towers on the horizon show that it is. All that can be seen of the Liberty trucks is their hood bows, but the Nash Quads and FWDs are now completely submerged 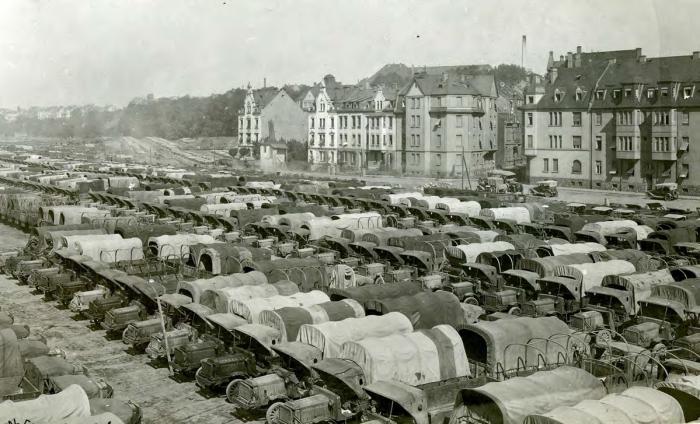 Also, photographed from the railway bridge, thousands of trucks can be seen stretching off into the distance. Those vehicles in the distance are on a slight rise and were mostly saved from the flood 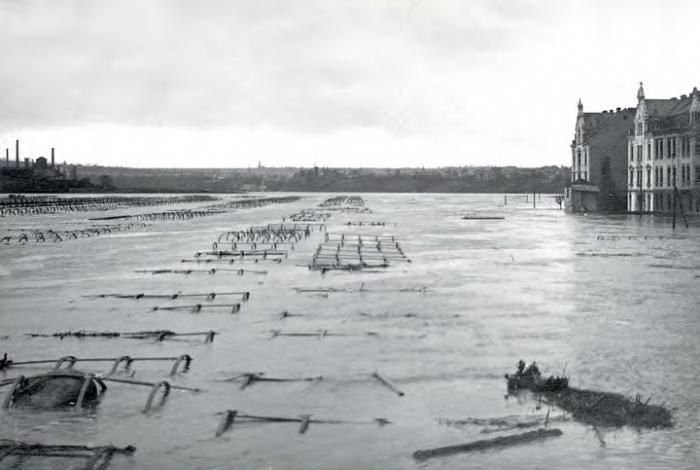 The shock felt by the directors of Motor Organisations when they saw what had happened to their investment can only be imagined. The flood has taken away everything that was not fixed down, lamps, canvas, seats and tools. On the left, can be seen a fuel tank jammed into the back of a general service truck

The objective of MO in returning these vehicles to the UK to sell them on to vehicle-starved customers was shattered. Apart from those stored at Bitburg which had escaped the flooding, MO were now the owners of a devastated supply depot and almost 10,000 vehicles which required a complete rebuild.

A review of the contract and the threat of litigation showed that the US Army had been negligent and a reduction in price of 50% was agreed. One good piece of news for MO was that having spotted a photographer from the Universal News Service filming the carnage they managed to convince the US occupation forces to establish an embargo preventing the publishing of any news or photographs of the event fearing that it might affect the sale price.

This obviously worked as the only surviving information on this great flood comes from a brief US Army report, the four albums provided by MO and the handful of photographs used in this article. 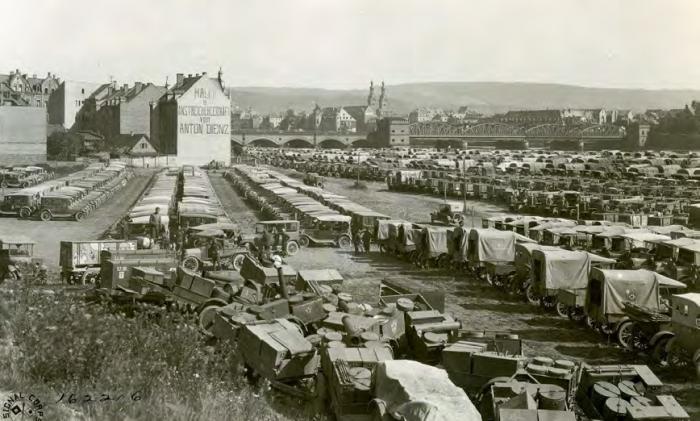 The annexe to the main park on the north bank of the Mosel river. In the foreground are some field kitchens with Dodge staff cars Model T Fords, Nash Quads and FWDs all visible. In the background is the railway bridge from which location many of the other photographs were taken