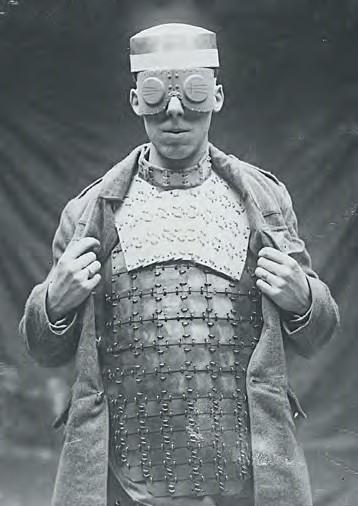 In 1914, the British Army soon found itself embroiled in a kind of warfare it had never expected to experience and was entirely unprepared for. The war of brilliant manoeuvres and great set-piece battles for which it had practised rapidly degenerated into a gruelling war of attrition; one in which constant shelling and small arms fire inflicted horrendous wounds on men clothed in soft uniforms with little head or body protection.

As well as the introduction of the Brodie helmet in 1915, which entered general issue the following year, some thought was given to the protection of a soldier’s torso – after all, some 60% of wounds were reported to be to the extremities, with 20% to the head and neck, and the remaining 20% to the torso. Indeed, in 1915 and 1916, the British Army Design Committee investigated the provision of personal body armour for use in the trenches. In particular an evaluation was made for a ‘Body Shield for Bombers’.