WHAT IS described as a wallmounted bomb direction indicator from Prime Minister Winston Churchill’s Cabinet War Room reserve bunker was being offered for sale in an online auction as this magazine went to press. The bunker was codenamed ‘Paddock’ and was located at Brook Road, Dollis Hill, London, under a corner of what was the Post Office Research Station.

With the threat of war looming, plans for the standby cabinet rooms of the British Government began in 1938, with construction commencing in 1939 beneath the Dollis Hill Post Office Research Station. Comprising forty rooms over two floors, the bomb proof facility was specifically designed to protect the British Government and war leadership should the cabinet war rooms at Westminster be damaged or destroyed. Used on only two occasions, the cabinet rooms were finally decommissioned in 1944, after which they were used by the Post Office for staff rooms before finally falling into disrepair following water ingress.

It was during this period that the unusual indicator light panel was salvaged. The unique piece of equipment can be seen in photographs of the reserve cabinet war rooms before work began to rectify the water damage. The indicator’s display would apparently light up to show which geographic region of London was currently being hit by bombs, with the ‘IL’ panel presumably indicating Inner London. However, it is not known whether the indicator panel was actually ever used on the limited occasions that ‘Paddock’ was put into service, although the item is certainly a most unusual piece of Home Front history.

Described by auctioneers Laidlaws as being of an opaque glass and metal construction, 28 cm wide x 15 cm deep x 79 cm high, the device had reached a figure of £650 on an online auction site (The Saleroom) when Britain at War went to print. 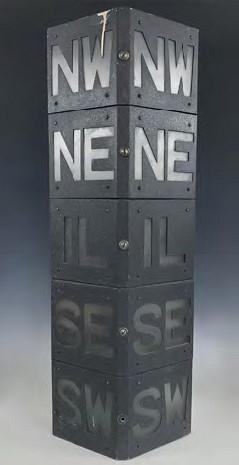