THE LARGEST warship built for the Royal Navy since HMS Hood, the supercarrier HMS Queen Elizabeth, exited Rosyth Shipyard and went to sea for the first time in late June ahead of her sea trials. Described as ‘four acres of sovereign territory’, the 65,000 ton aircraft carrier, representing a total construction time of 51,000,000 man hours, was moved by a fleet of 11 tugs out into the Firth of Forth, where she awaited low tide and then passed under the iconic Forth Rail Bridge, having to retract her mast to do so. Escorted by the frigate HMS Sutherland, and later joined by HMS Iron Duke, Queen Elizabeth later commenced her first stage sea trials off the Scottish coast. 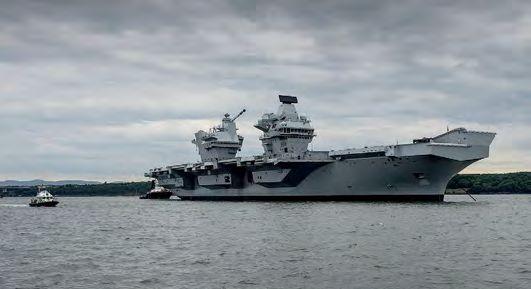