They were killed on 25 September 1943 in a bloody assault on Hill 270, a strategic point near Capezzano. Each soldier, from the Coldstream Guards, was carried to their grave by bearers from their regiment, and buried with full honours. The service was conducted by The Reverend Jacob Caldwell CF, Chaplain to the 1st Battalion Coldstream Guards.

Speaking on behalf of the family, Michael Blackham told Britain at War: “Nineteen family members were able to travel to Italy, including Ron’s sister, Alma. Due to ill health his brother Douglas and sister Joan were unable to be there. The oldest member of the party was Stanley’s widow Sheila and the youngest was two-year-old Conon, Ron’s great-nephew and Alma’s great-grandson.” 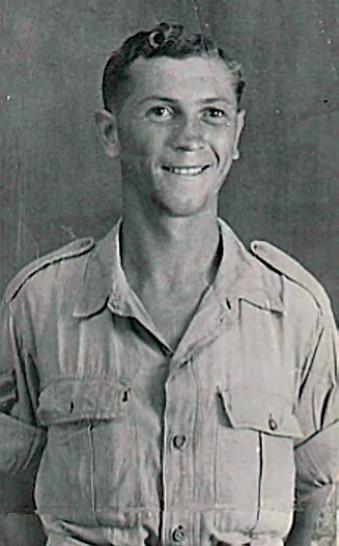 More great nieces and nephews were also in attendance. “We hope the children will remember the significance of the occasion and that they will be able to tell the generations to come”, said Michael.

L.Cpl. Ronald Blackham was born on 6 October 1920 in Weaverham, Cheshire. He was the first son of George and Florence Blackham and the eldest of four boys and two girls. He enlisted, aged 19, and on 18 June 1940 joined the Coldstream Guards, serving in North Africa and Italy.

The burials were organised by the MOD’s Joint Casualty and Compassionate Centre (JCCC), part of the MOD’s Defence Business Services, and came at the end of years of research. The original discovery was made in 2014 by two groups of local historians, Associazione Salerno 1943, which found the remains of Ronald and of one other soldier, and Avalanche 1943, who found the third man. The groups scour the slopes and valleys around Salerno and often locate artefacts such as cartridges, or more personal items.

The fallen men were agonisingly close to their objective. Pierpaolo Irpino, of Salerno 1943, which has found eight soldiers - four British, three German, and one American - stated: “They were very close to the top of the hill. We think Ronald and the other two soldiers almost managed to complete their mission… They were very near to the German trenches. They were just metres apart.” Ronald’s sister, Alma Williams, 80, but just six when her family received news of Ronald’s death, vividly remembered the event: “I was with Mum at the front door. She opened the telegram and collapsed. She had a severe stroke… You live with it all these years… Finally, the answer to what happened to him. It’s a great relief to know he went quickly.”

“Alma called her father from upstairs, who carried his wife to bed”, explained Michael: “She didn’t speak for six weeks.” 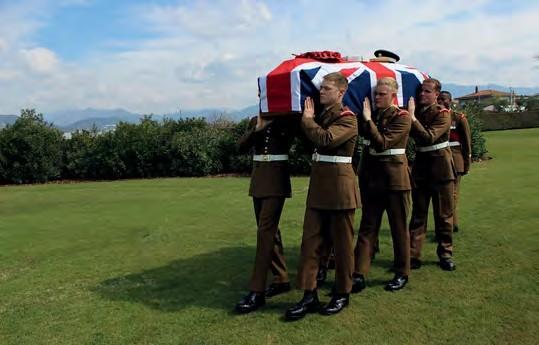 Guardsmen carry one of the three fallen soldiers.
(CROWN COPYRIGHT)

Luigi Fortunato, also of Salerno 1943, said: “To return Ronald Blackham to the affections of his family, allow the brothers still living to have a tomb to pray, to give a name and a face to a young man who went missing, brings us a great emotion and rewards the efforts and the resources spent for the fieldwork.”

A member of Avalanche 1943, Pasquale Capozzolo, stated: “The search and retrieval of the fallen in our area is a source of pride, and [to] know the remains of members of 3rd Battalion, Coldstream Guards, will have a proper burial has filled our hearts with joy.”

The Coldstream Guards were brought up to clear Hill 270 on 25 September 1943. The slopes were covered in thick vegetation concealing machine guns and fortifications. The Guard’s 3rd Battalion deployed 1 Company, to lead the assault, with 3 Company, which included L.Cpl. Blackham, in support. At 11:40 the attack began with 1 Company on the left and 3 Company on the right. The current CO, 1st Battalion Coldstream Guards, Lt. Col. James Thurston, described an action in which numerous guardsmen became casualties, many to snipers, mortars, and shelling. Machine guns tore through the attacks, and shelling ignited fires which quickly caught in the dry scrub. Regrettably there were huge losses, at least 120 killed or wounded in the action, including L.Cpl. Blackham.

Lt. Col. Thurston added: “Although more than 70 years have passed since, the burial we have witnessed today has lost none of its poignancy or significance. The sacrifice made by L.Cpl. Blackham and his fellow Coldstreamers reminds us of more recent operational casualties and it is our privilege to honour the enduring courage and loyalty of soldiers from each generation.” The MOD spent two years establishing Ronald Blackham’s identity, extracting DNA and tracing relatives. Ron was identified through a match with his brother, Douglas, 91. Michael Blackham explained: “Douglas originally received a letter in October 2016, explaining remains had been discovered that may be Ron’s and asked if Douglas, as a male sibling, would be willing to submit DNA testing.

“His initial thoughts were one of incredulity – was this genuine? After talking to Sue Raftree MBE, from the JCCC and realising it could be Ron, the DNA sample was sent and then there was an agonising wait… We received the confirmation on 13 December.

The remains were definitely Ron’s. Douglas was overwhelmed. He said, ‘After 74 years I don’t know what to feel. It’s been such a long time’…. The JCCC have been superb. Their professionalism and compassion has affected the whole family.”

The discovery of Ronald Blackham has inspired the family to further research the battles around Salerno: “As the family read more about the battle, and the numbers involved, it seemed incredible to us that after all these years it could be him… All the family knew was he was killed in the Italian campaign in Salerno, and that his name was on the memorial at Monte Casino, visited by Douglas in the 1980s.” 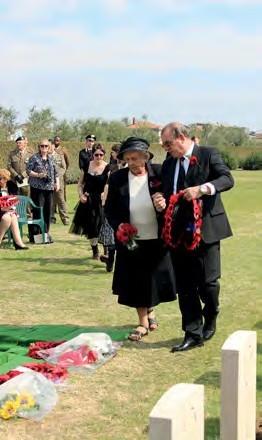 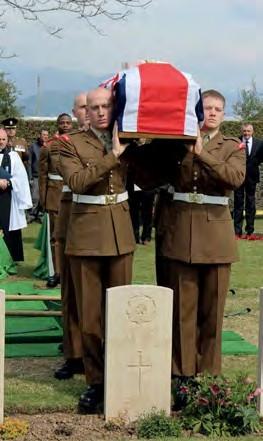 “We were amazed that Ron was mentioned in Christopher Bulteel’s [MC awardee, Coldstreamer and Salerno veteran] book ‘Something about a Soldier’: ‘We seem to have equipped ourselves with a machine gun mounted on a tripod and during the day Corporal Blackham was firing at parties of Germans in the distance. They retaliated.’ We believe this incident was on 23 September, two days before Ron’s death.”

The Ministry of Defence hopes to establish the names of the other guardsmen. Tragically, testing suggests one may only have been 16. If true, he would have lied about his age to join the Army. Their tags, made from pressed fibre, would have quickly rotted; therefore, British soldiers from the period are among the hardest to identify. Steel or copper tags were used by other armies, though the USSR used paper slips encased in an ‘unlucky’ and rarely worn wooden cylinder – equally unlikely to survive.

LGC Group supports the MOD in the identification process, and examine and analyse DNA extracted from remains. Victoria Moore, Science and Innovation Division at LGC, also attended the ceremony. She said: “[I] feel immensely privileged to have assisted in the identification of L.Cpl. Blackham. Continuing: “DNA profiles have been obtained from the remaining two unknown soldiers, and where possible we will continue to test any further potential familial relatives that may come forward.”

Both the Coldstream Guards and Ronald’s family have thanked the local historians, and the ceremony saw three headstones erected, one with Ronald’s details, and two inscribed with “A Soldier of the 1939-1945 War. Known Unto God.”

“The ceremony was so moving,” related Michael: “The family have nothing but praise and admiration for the burial party, the ministrations of Padre Jim Caldwell and the attendance of Her Majesty’s Ambassador to Italy, Jill Morris.”

“When the bugler played “The Last Post” it struck home Ron had his final resting place with his (as yet) un-named colleagues… The ceremony has cemented relationships within the family and between subsequent generations, that otherwise would have been lost.

“I’m eternally grateful, there are no words to describe it…” Alma stated: “Had he not been found he would still be in that hole… I’m just grateful that at last he can rest in peace, along with his two comrades. It’s overpowering.” She continued: “I have clear and treasured memories of his 21st birthday celebrations, his last visit on leave and also the devastation and sadness caused by the news of his death.

Douglas reflected: “Ron was my much loved and missed older brother. My parents never emotionally recovered from his loss. I am so pleased that my DNA was able to close this door.” Michael concluded: “[Ronald’s] burial was an occasion that will always be remembered, which is how Ron should be – remembered always for the sacrifice he made.” 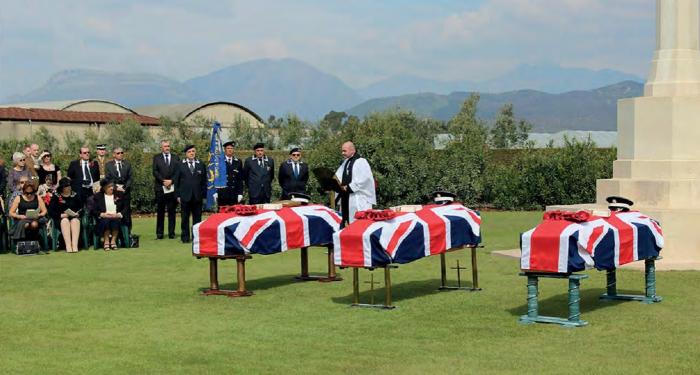 The service to lay to rest L.Cpl. Ronald Blackham and his two fallen comrades.
(CROWN COPYRIGHT)