Shortly before the coronavirus pandemic gripped the UK, the Kent Battle of Britain Museum took delivery of its CASA 2.111B/Heinkel He 111H-16 from Duxford. Its chairman, Dave Brocklehurst MBE, gives an overview of the epic project to move the bomber to Hawkinge. 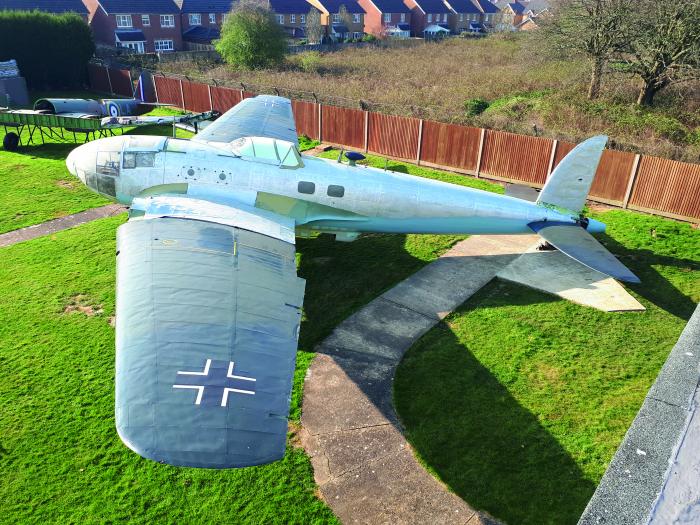 THE HEINKEL UNDER RESTORATION AT HAWKINGE ON APRIL 9. (ALL IMAGES COURTESY OF KENT BATTLE OF BRITAIN MUSEUM UNLESS NOTED)

As an important Luftwaffe aircraft type from World War Two, adding a Heinkel He 111 to our collection has been a dream for us at the Kent Battle of Britain Museum for decades. We were therefore delighted to finally acquire one, a former Spanish Air Force CASA 2.111B/Heinkel He 111H-16 from IWM Duxford in Cambridgeshire, and we were understandingly keen to move it our Kent home for reassembly, restoration and display.

After many months of negotiations with Martin of Welch’s Specialist Movements and Welch’s Crane Hire, the Highways Agency finally issued the notice that we could move the Heinkel fuselage and centre section at 1am on Sunday March 15. The aircraft, which has spent most of the winter with our friends at the Duxford-based Aircraft Restorations Company, had previously had her undercarriage legs retracted, main wheels removed, and a supporting frame added. She was loaded by Welch’s onto a trailer unit on the Thursday before in preparation for the big move. At over 23ft wide and 54ft long (7m by 16.5m) she required a rolling road closure and police escort, for the 110-mile (177km) journey to her new home. As she was travelling through three counties – Cambridgeshire, Essex and Kent – it was decided to employ the Essex Police Force to carry out the escort throughout the whole journey, rather than split it through three constabularies.

At midnight on March 14, a minibus of museum volunteers met the team from Welch’s and the Essex Police, and at 1am the procession of vehicles left IWM Duxford for Hawkinge. The journey went smoothly, thanks to Welch’s detailed planning, until the last 50 yards where we found a local resident had left his car on the Aerodrome Road, partially blocking the route. Luckily, thanks to the skill of driver Phil, the lorry was able to manoeuvre past with inches to spare. The trailer had independent rear steer and was carefully reversed into the widened entrance to the museum car park and over a temporary road laid a few days earlier, arriving at 4.20am.

At 7am the offloading process began with thanks to the Darren Scott of Scotts Transport who used his HIAB [crane] to carefully move the fuselage and centre section onto large-axle stands. Her undercarriage was lowered, and her mainwheels were reattached before the bomber was placed back onto her wheels. From there Darren carefully lifted her over the inner compound fence and onto another temporary road. She was then towed into position where she will be displayed until we can erect a suitable hangar for her. 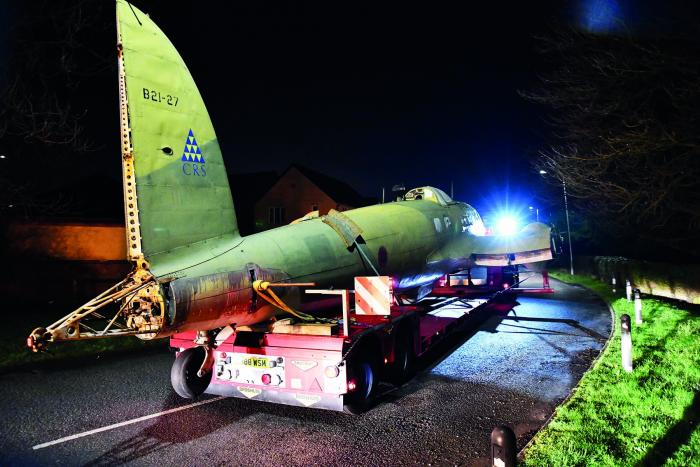 Oh Go On Then!

Julian Richardson from the museum and I looked at our watches, expecting the time to be mid- or late afternoon, but it was still only 10.20am, so we decided to attempt to fit her wings while we had Darren and his HIAB on site. The wing bolts were found to be in excellent condition and after being cleaned in thinners and greased, they were ready to be fitted. By 1pm, just 12 hours after leaving Duxford, she had both wings attached and was looking stunning. 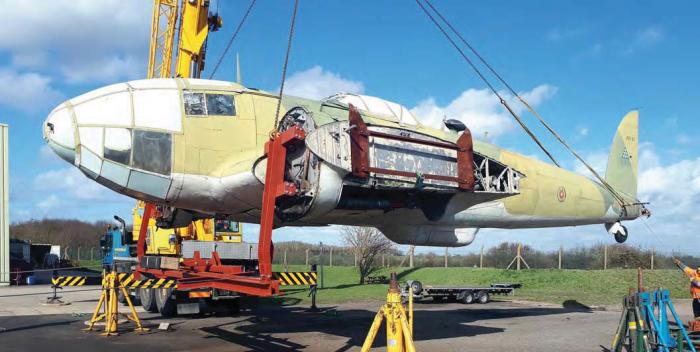 AFTER CONSIDERABLE WORK, BY MID-MARCH THE BOMBER’S FUSELAGE WAS READY FOR ITS TRIP TO KENT.

The very next day the volunteers started her restoration, initially stripping her layers of paint from the fuselage and centre section. Three days after arriving at Hawkinge the Imperial War Museum closed due to the Covid-19 virus, so we were very lucky to have scraped through with the delivery. The following week the whole country was put into lockdown and the volunteers followed the government advice to self-isolate. By this time though, they had managed to strip back a large percentage of her fuselage to the aluminium.

Since then one volunteer, who lives on site, has been progressing what he can on the Heinkel and around the museum, so when it is safe to reopen, we can do so as quickly as possible. The bomber will be displayed in Luftwaffe colours, wearing the markings of A1+DA of KG 53, which was shot down over London on September 15, 1940.

Like all other museums in the UK, the centre is temporarily closed due to the coronavirus crisis, but will reopen with refreshed
exhibits as soon it’s allowed to do so. Contact: Kent Battle of Britain Museum, Aerodrome Road, Hawkinge, Folkestone, Kent,
CT18 7AG. Tel: 01303 893140. www.kbobm.org