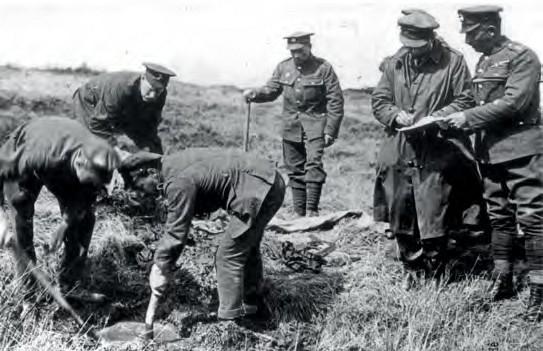 A British Graves Registration Service party at work on a battlefield site at the end of the First World War.

CONCERNS HAVE surfaced around the work of the Australian organisation charged with exhuming bodies and reburying them at the end of the First World War, reports Tim Barlass. They are raised by the author of a new book who has studied a 790-page report into a Court of Inquiry into the Australian Graves Services.

From 1915, the Graves Registration Commission had been recording where Commonwealth soldiers were buried, and at the start of 1919 Australia sent 1,000 men from the AIF Australian Graves Detachment to help clear the area near Amiens. But according to ‘Missing in Action’ (Allen and Unwin), behind the horrific work being undertaken was a backdrop of misconduct, fraud and hoaxing. The work entailed exhumation of unmarked graves in the hope of identifying the contents so they could be reburied in a properly marked grave.