In the biggest world crisis for many decades, the coronavirus pandemic has claimed countless lives and caused massive disruption around the globe. The outbreak claimed its first life in China in early January, and was declared a ‘public health emergency of international concern’ by the World Health Organization by the month’s end. It spread rapidly, with the UK suffering its first death attributed to Covid-19 on March 5. 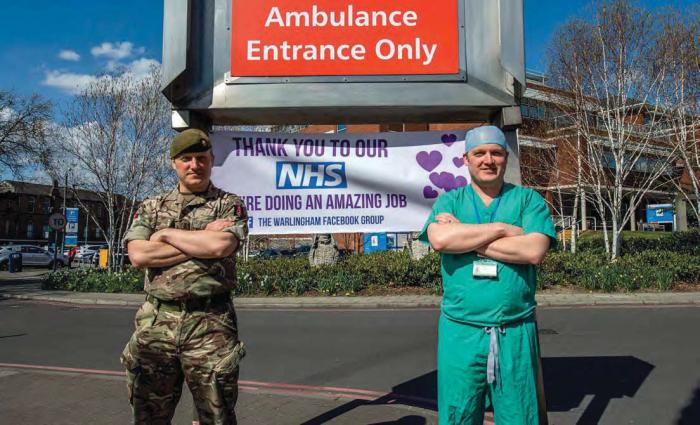 Various measures, such as travel restrictions and social distancing, were introduced to slow or stop the virus before the UK Government ordered a ‘lockdown’ for all-but the most important journeys and job roles on March 23. Similar restrictions have been put in place by virtually every other nation around the world.

As part of the UK’s response to the pandemic the armed forces have been utilised, helping the emergency services and providing much-needed logistics profile action to date is the army’s assistance in building the 4,000 bed emergency Nightingale Hospital in London. Elements from the Royal Anglian Regiment and Queen’s Gurkha Engineers, part of 36 Engineer Regiment, arrived at London’s Excel centre in late March and helped to have it established there in under a fortnight.

The cost in lives has been very high, with the elderly proving to be especially vulnerable. Sadly, a number of World War Two veterans have passed away during the crisis, although as official information isn’t always available it’s unclear if these deaths are directly attributable to the virus.

Museums and events around the world have been hard hit by lockdown restrictions that have resulted in temporary closures, postponements and shows being cancelled. There are hopes that some events may take place towards the end of the summer, providing the virus is brought under control. The Cosford Airshow team, that its event scheduled for June might be held in September if the situation greatly improves and if it’s logistically possible. Likewise, the Tank Museum has moved Tankfest from June to September.

Although museums are closed in line with government advice, many have risen to the challenge and increased their online content, with special features being released on exhibits and displays to encourage ‘virtual’ visits. The huge negative economic consequences of the shutdown are reverberating around the world though, with businesses largely forced to rely on e-commerce where possible. Museums, events and history-themed visitor attractions that depend on admission fee income have been particularly affected, despite a number of government initiatives and grants designed to ease the impact. While some are able to cope, others face very difficult times – one large UK museum told Britain at War that it will close permanently if it cannot hold events in 2020.

But there have been some positives. As mentioned in the editorial on page 3, there has been a resurgence of community spirit in response to the current crisis.One of the most heart-warming stories involves then 99-year-old veteran Captain Tom Moore. He set out to raise £1,000, but has so far raised more than £18.25m for NHS Charities Together by completing 100 laps of his garden before his 100th birthday at the end of April. A guard of honour from the Yorkshire Regiment saluted Moore, a veteran of the now amalgamated Duke of Wellington's Regiment, as he completed his challenge on April 16..