The First World War in Objects 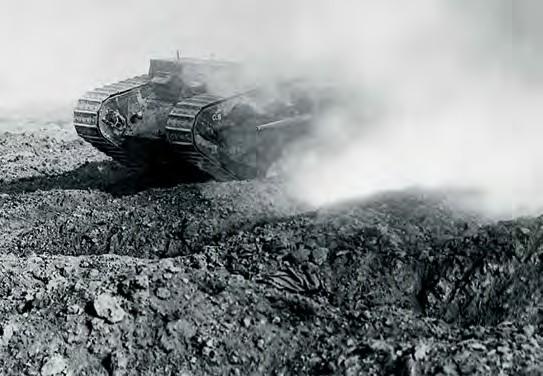 Crème de Menthe advancing to the attack on 15 September 1916. C5 did reach her objective, but only after the majority of the infantry she was supporting had already arrived. Despite this, her 6-pounder guns were used to destroy a number of German machine-gun posts located in the Courcellette sugar factory, resulting in the surrender of fifty German soldiers.
(HISTORIC MILITARY PRESS) 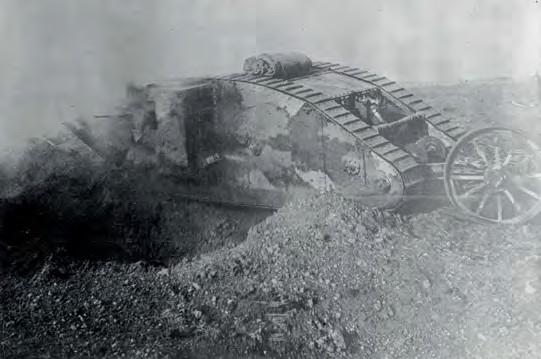 The very image of C5 that appeared on the front of The Daily Mirror – by the time this footage was taken on Pozières Ridge, by Frederick Bovill or his assistant, she had lost one of the tail wheels. It was the first time that a photograph of a British tank in action had been published in the United Kingdom. The Daily Mirror had paid the Canadian War Records Office the not inconsequential sum of £1,000 for exclusive rights to this series of images.
(LIBRARY OF CONGRESS; LC-B2-4068-4)

The crested china model of C5, Crème de Menthe, that was produced within days of the publication of the first pictures of her in action during the Battle of Flers-Courcelette. The mistake with the missing wheel was soon rectified. Crested china tanks were one of the most popular subjects produced by the potteries in the war.

In the latter half of the nineteenth century, in a moment of inspiration, the Stoke-on-Trent-based Falcon Pottery, owned by William Henry Goss, started manufacturing white porcelain models which were generally embellished with the coat of arms of a particular town, city or county. In so doing, Goss created a whole new ‘souvenir’ market, his pieces of crested china, ‘fancy ware’ as they were often called, being eagerly sought after by tourists and collectors alike to mark a memorable holiday or national event. For almost half a century, Goss’ products, and those from a number of other firms, formed the basis of a burgeoning seaside souvenir industry. It was one, though, that was drastically curtailed by the outbreak of war in 1914.