OUR SERIES THAT LOOKS AT IMPORTANT MILITARY WEAPONS USED BY BRITISH AND COMMONWEALTH FORCES FOCUSES ON THE CROMWELL CRUISER TANK OF WORLD WAR. 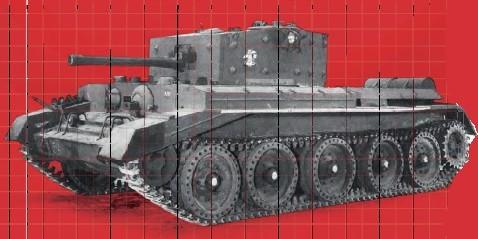 The Cavalier was the first in the Cromwell family line. Based upon the Crusader, it was unsuccessful and mainly used for training.
(ALL IMAGES VIA DICK TAYLOR UNLESS NOTED)

The A27 Cromwell – officially, Tank, Cruiser, Mk.VIII, Cromwell (A27M) – was the first of a series of improved cruiser tanks that Britain started to produce as experienced was gained during the Second World War. The first designs, such as the A9, A10 and A13, were from the interwar period and were rapidly outdated. The tanks introduced between 1940 and 1942 were rushed into service with attendant problems, which included the dreadful A13 Covenanter and the improved, but nonetheless flawed, A15 Crusader.