D-Day 75 – Tribute To The Veterans 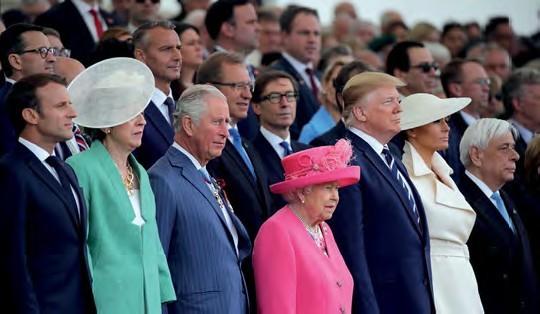 Her Majesty The Queen and other dignitaries paying tribute to Normandy veterans at an international event on Southsea Common on June 5.
(CROWN COPYRIGHT 2019) 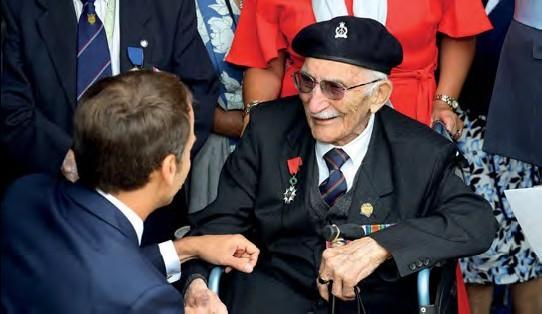 THE 75TH anniversary of D-Day, the largest combined land, air and naval operation in history, has been commemorated in Normandy and around the world, writes Alex Bowers. Thousands, including heads of state, world leaders and veterans, gathered to pay tribute to the 156,000 Allied service personnel who fought in the initial stages of Operation Overlord, and whose bravery and determination ultimately led to the liberation of Europe in the Second World War.

Days before the official commemorations took place, it was announced that several installations and vehicles used in training exercises for D-Day would be listed as part of a government initiative to preserve their historical significance. Included in the collection are six replica landing craft at Braunton Burrrows in Devon and nine sunken tanks and two armoured bulldozers which are in the sea off the Devon coast. Also protected will be parts of Mulberry Harbours – temporary portable docks developed for the rapid offloading of cargo during the Normandy invasion – that survive in the UK. The Chief Executive of Historic England, Duncan Wilson, said: “It is vital that we protect [these landmarks] as a memorial for future generations.”

On June 5, a major commemorative event was held in Portsmouth – one of the key embarkation points for landing craft in 1944 – to mark 75 years since the Allied forces set sail for the Normandy invasion. Dignitaries in attendance included HM The Queen, HRH The Prince of Wales, British Prime Minister Theresa May, US President Donald Trump – concluding his three-day state visit to the UK – and Canadian Prime Minister Justin Trudeau. The event saw one of the biggest mobilisations of the UK Armed Forces in recent years, with some 4,000 personnel, 11 Royal Navy vessels and numerous aircraft taking part. Hundreds of D-Day veterans, who Mrs May later said belong to a “very special generation”, took centre-stage throughout the day to highlight their outstanding contribution. Joining them were around 60,000 members of the public who also gathered on Southsea Common to pay their respects.

Upon the arrival of The Queen, musicians from the Band of the Royal Marines played a fanfare, with the Tri-Service Orchestra performing the national anthem. In her speech The Queen said: “75 years ago, hundreds of thousands of young soldiers, sailors and airmen left these shores in the cause of freedom… Many of them would never return, and the heroism, courage and sacrifice of those who lost their lives will never be forgotten. It is with humility and pleasure, on behalf of the entire country – indeed the whole free world – that I say to you all, thank you.”

Theresa May was among those who took part in an hour-long production telling the story of D-Day through readings, testimonies, music and theatrical performances. The Prime Minister read out a letter from Captain Norman Skinner of the Royal Army Service Corps to his wife Gladys, dated June 3, 1944. Captain Skinner was killed in action a day after the invasion, leaving behind his wife and two young daughters. 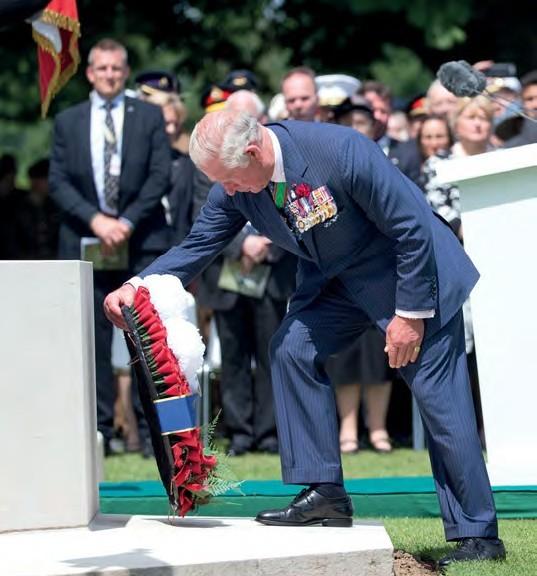 Two special flypasts took place in the afternoon, one by the Red Arrows and the other, with its flight path from Duxford, Cambridgeshire, to Le Havre, France, comprised more than 30 historic aircraft including 20-plus Douglas C-47 ‘Dakotas’. In 1944, around 24,000 Allied troops, ferried in a fleet of 800 Dakota aircraft, were dropped behind enemy lines in the early hours of June 6. The airborne raids conducted by these soldiers laid the groundwork for the Normandy landings. One D-Day veteran, John ‘Jock’ Hutton, 94, of Maidstone, Kent, paid tribute to his comrades by again parachuting into France on the official anniversary date. Speaking after the jump, he said: “I feel good. This was a very different kind of landing to when I arrived in 1944.” 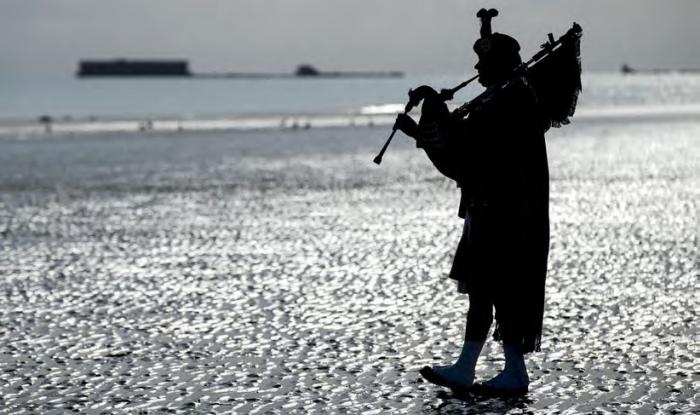 A conclusion to the Portsmouth commemorations saw Prime Minister May, Defence Secretary Penny Mordaunt and First Sea Lord Sir Philip Jones aboard HMS Queen Elizabeth waving off around 250 veterans as they set sail on MV Boudicca, bound for Normandy. Well-wishers gathered by the seafront while HMS St Albans, a Canadian warship and four Royal Navy P200 patrol vessels escorted the veterans out to sea to eventually join the commemorations occurring the following day, June 6.

At 06:26 BST (07:26 GMT) – the precise time that the D-Day landings began on June 6, 1944 – Pipe Major Trevor Macey- Lillie played Highland Laddie, a popular Scottish lament, as played by Private Bill Millin on Gold Beach 75 years before. It marked the opening of the day’s commemorative events throughout Normandy. 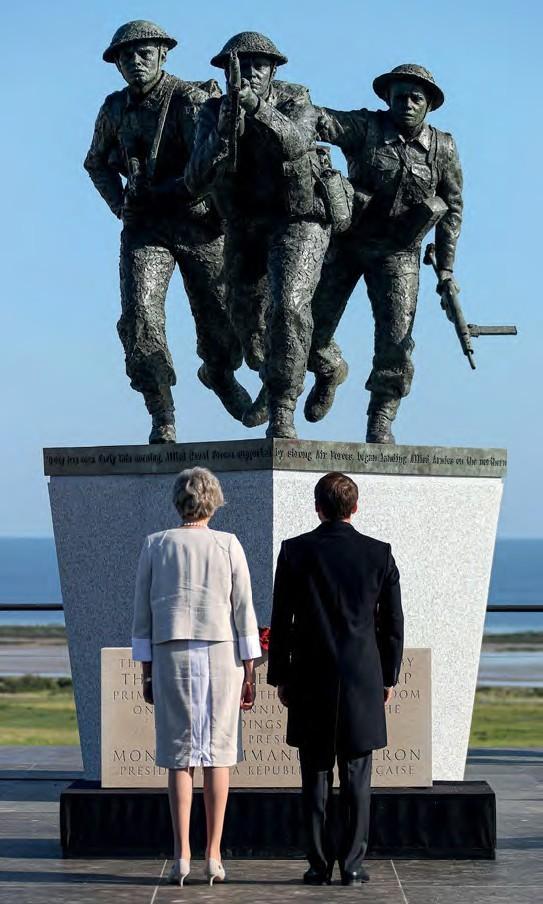 Mrs May and French President Emmanuel Macron attended an inauguration ceremony in Ver-sur- Mer, where the first part of a new memorial, featuring a sculpture of three advancing soldiers by David Williams-Ellis, was officially unveiled. When finished, the monument will list the names of all 22,442 members of the British armed forces who died during the campaign.

Later in the day, The Prince of Wales and The Duchess of Cornwall, accompanied by other dignitaries, attended a Royal British Legion remembrance ceremony at Bayeux Cathedral – situated in the first city liberated after the invasion. Tributes were paid to those who served and sacrificed, including a message read out on behalf of Pope Francis who expressed his gratitude for the many soldiers who showed “courage to commit themselves and give their lives for freedom and peace”. During the service, veteran Kenneth Hay read out a poem written by the late Cyril Crain, who served alongside Canadian forces on Juno Beach before passing away in 2014, aged 91. It read: “When my life is over, and I reach the other side, I’ll meet my friends from Normandy, and shake their hands with pride”. 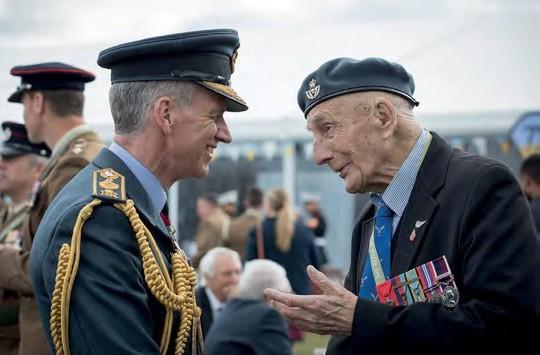 The service was followed by a ceremony held at Bayeux War Cemetery, the final resting place of the largest number of Commonwealth servicemen in France from the Second World War. Wreaths were laid at the foot of the Cross of Sacrifice, and a two minutes silence was held to honour those of all nations who fought for freedom.

Elsewhere, HRH The Duke of Cambridge laid a wreath at the National Memorial Arboretum in Staffordshire on June 6, as part of a service attended by more than 2,000 members of the public. Around 20 D-Day veterans also took part in the event held at Heroes’ Square. Prince William, before departing for Normandy to join other dignitaries, delivered a short reading from his greatgrandfather, George VI. 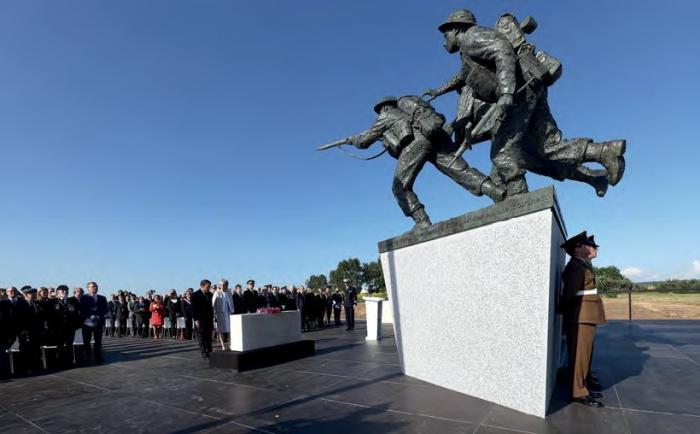 The unveiling of the D-Day sculpture by David Williams-Ellis, commissioned by the Normandy Memorial Trust, was held at the British Normandy Memorial site in Ver-sur-Mer, France, on June 6.
(CROWN COPYRIGHT 2019) 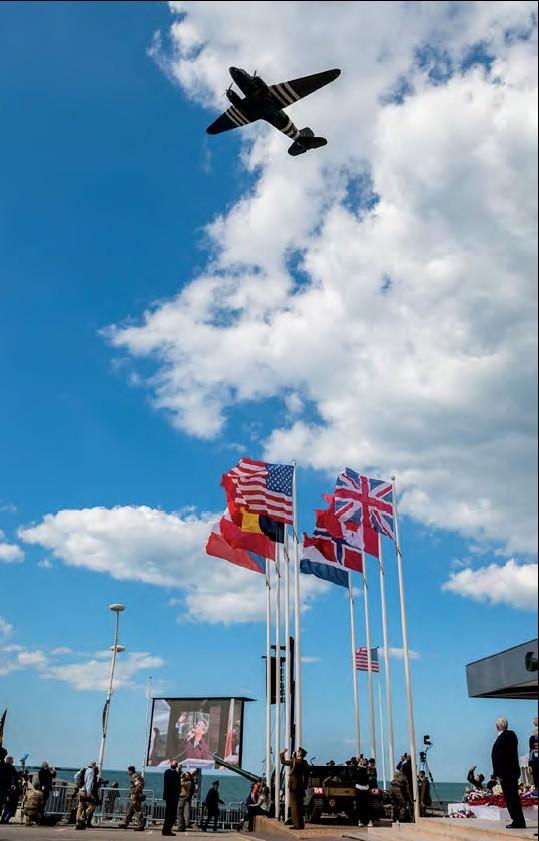 A Dakota flying over Gold Beach in France during the commemorations.
(CPL JAMIE HART/CROWN COPYRIGHT 2019)

The French Consulate in Edinburgh, Scotland, hosted an event to award 15 Scottish D-Day veterans with the Légion d’honneur – France’s highest military honour. Dr Claire Armstrong, Chief Executive of Legion Scotland – who organised the ceremony – said: “Today’s service provided us with an important reminder of both bravery and tragedy… it was a poignant and historic moment to witness.”

More than 1,000 people gathered at a beach in Rhyl, Denbighshire, Wales, to watch the unveiling of a new statue honouring those who served during D-Day. Chainsaw artist Ian Murray used a single piece of timber to create a life-size memorial depicting a soldier taking part in the Normandy invasion. The event, organised by the Royal British Legion and Woody’s Lodge, also featured a reading by lead organiser Bill Porter, who afterwards described it as “very emotional”.

D-Day was, of course, marked around the world. The federal government of Canada hosted an event in Halifax, Nova Scotia, to pay tribute to the Commonwealth soldiers who stormed Juno Beach. The city was chosen due to its port, where thousands of Canadian service personnel embarked for Europe. Julie Payette, the Governor General of Canada, who had been in France earlier in the day, attended the ceremony. Speaking about the significance of the commemorations, she said: “one of the important lessons we get from this is a lesson of hope.” 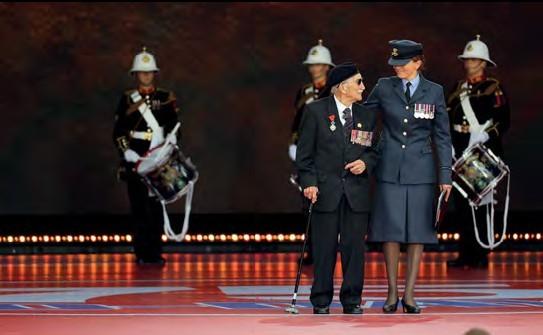 D-Day veteran Henry Cullen on stage at Portsmouth for the tribute to Normandy veterans on June 5.
(CROWN COPYRIGHT 2019)