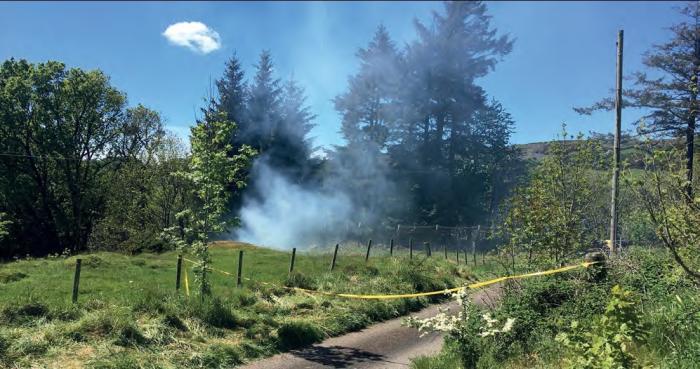 A SPATE of unexploded ordnance discoveries has led to disruption across the UK. In Kingston, southwest London, more than 1,500 homes and a university campus were evacuated, while polling stations were relocated following the discovery of an unexploded device on a building site on Fassett Road on May 23.

Police and EOD teams worked for more than 30 hours to make it safe, it having been identified by specialists ZecticaUXO as a 250kg bomb of German origin. Normally, such devices found in urban areas are moved to a remote location, but this time it was not safe to do so. Measures were taken to reduce the impact of the blast, but the controlled detonation carried out by army EOD teams left behind a large crater and smashed windows.

A major find was also dealt with near the Needles off the Isle of Wight, when fishermen raised a German mine on May 18. The sea mine, thought to have contained 2,000lb (910kg) of explosive, was lowered to the seabed by Royal Navy EOD personal the following day. After warnings were issued to nearby vessels the mine was detonated, generating a huge plume of water and sediment.

Elsewhere, on June 7, Kings Hill in Kent was said to be a ‘ghost town’ following the discovery of what the army described as a German SD50 bomb. Kings Hill was built on land occupied by the former RAF West Malling, which was bombed several times. The explosive ‘link’ to its wartime heritage was quickly disposed of by Kent Police and EOD teams but necessitated the establishment of a 660ft (200m) cordon.

EOD personnel were also called to Swadlincote, Derbyshire, on June 6, when a wartime bomb was found behind a busy supermarket. A 330ft (100m) cordon was put in place by police who later confirmed the device was not live. EOD teams were also called to Clacton, Essex, on May 22, Lambeth in London on June 3, and to Wembley on June 7.

One of the more unusual callouts relates to the discovery of a weapons cache near Tongland Dam, in Dumfries and Galloway, on May 22. Technicians from SP Energy Networks reported the find after uncovering more than 70 No.76 Special Incendiary Grenades.

The self-igniting grenades were developed by the RAF as an offshoot from another project and issued to the Home Guard as anti-tank weapons. They contained benzene and white phosphorus inside a glass casing. While unlikely to have disabled an armoured vehicle, the fragile grenades were potentially deadly to the user as the filling ignited on contact with the air. In a bid to keep them safe, they were often stored in water or buried.

The nearby works disturbed the devices, one of which started to smoke. Emergency services established a 330ft cordon and conducted small-scale evacuations before the grenades were destroyed in a controlled explosion. 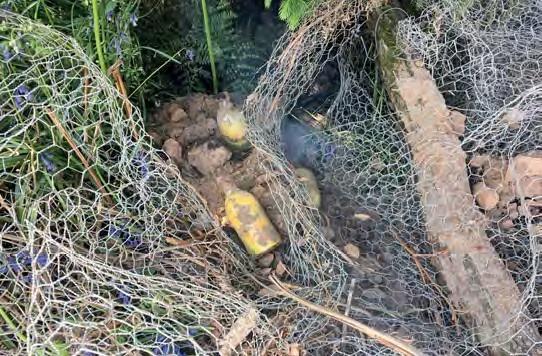 The No.76 Grenades in situ.
(IMAGES VIA SP ENERGY NETWORKS/SCOTTISH POWER)