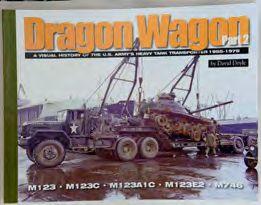 The first volume covered the M25/ M26 Pacific family of vehicles and trailers during their service in World War Two and Korea and part two picks up the story with the successor to the Pacific, the 10-ton M123 tractor.

The unarmoured M123 was in service through the 1950s and Vietnam while paired with the modernised M15A1 and M15A2 trailers from World War Two. It was also paired with the next generation of heavy trailers, the M747. The book also covers the M746 tractor with service pictures of its brief career.

Photographs include colour shots of the M123 in Vietnam from the National Archives and Records Administration (NARA), as well as numerous interesting black and white images taken during development and testing that show complete vehicles but also engine and cab details that will appeal to restorers and similar.

Verdict: It’s the Vietnam images that sell this book to me. They are probably old Kodachrome transparencies that show, for example, the trucks and trailers loaded with armour at Long Binh and Da Nang, and capture the heat, dust and mud of the Vietnam War