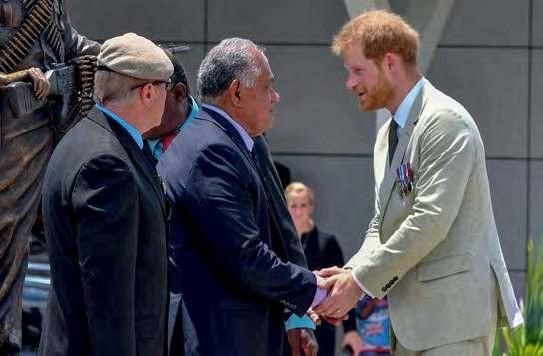 The royal couple paid tribute to the SAS hero when visiting Fiji as part of their regional tour. Labalaba was born on 13 July 1942 and joined the British Army in 1961. Known as the ‘Gentle Giant’, he served in Aden before deploying to Oman on the secretive Operation Jaguar.

Soon, mortar shells fell around and the CO, Captain Mike Kealy, noticed what he first thought was the screening force of Omani soldiers returning from their night posts. Sergeant Labalaba was one of nine SAS operatives within the facility, which consisted of two forts, the BATT house and a cluster of other buildings.

After a little hesitation – fearing that a friendly fire incident would undo their ‘hearts and minds’ effort – the SAS opened up with SLR rifles, their GPMG and a 0.50in caliber machine gun. 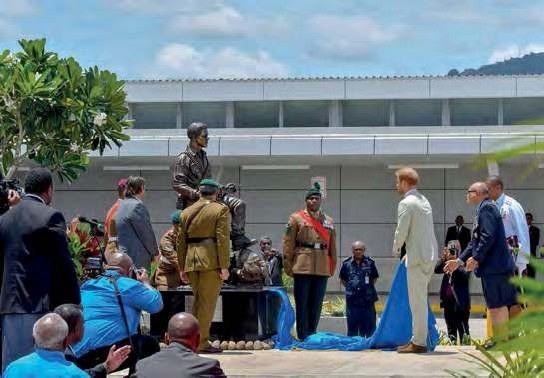 The Duke of Sussex unveils the statue.
(ALL IMAGES COURTESY OF THE GOVERNMENT OF FIJI)

A 3in mortar added to the fire. The Adoo splintered into groups and seemingly vanished into the ground, sporadically approaching in waves and breaching the perimeter. Omani troops, local police, and some Pakistani soldiers were also inside – around 40 in total. Even when they lent their rifles to the fight, the garrison was outnumbered perhaps as much as five to one, and facing a foe armed with AKMfamily weapons and RPGs, was also heavily outgunned.

Half-a-mile away the smaller of the two forts was occupied by nine embattled Omanis, nearby was a pit housing a 25-pdr gun defended by a solitary policeman. Labalaba ran to it under a hail of bullets, and finding the policeman injured worked the gun alone. He maintained a consistent rate of fire operating a howitzer normally crewed by a well-drilled team of six and maintained this resistance for more than two hours.

Rounds slammed into the sandbags and gun-shield, but, inevitably, Labalaba was hit. Despite sustaining a serious facial injury he scrabbled for a radio and notified Kealy – another Fijian, Trooper Takavesi, volunteered to make the same dash. ‘Sek’ secured the assistance of an Omani gunner, Walid Khamis, but Khamis was soon hit – though he survived and covered the Fijians – while Takavesi attended to the howitzer with Labalaba. The pair were aiming down the barrel, „[the Adoo] were less than five metres away“, Takavesi reflected.

Labalaba crawled towards a nearby 60mm mortar, but was hit in the neck and slumped, mortally wounded. Takavesi was hit in the stomach and shoulder but propped himself up and replied with his SLR. Kealy and a medic, Trooper Thomas Tobin, then ran the gauntlet. By now the Adoo were lobbing grenades. Only one went off, but Tobin was shot as he recovered Labalaba, later dying of his wounds.

The SAS men were down to their last magazines when Omani Strikemaster ground attack aircraft arrived and conducted strafing runs. A risky fire-mission from the SAS’ mortar followed, with the operator, Sergeant Bob Bennett, having to hug the barrel to raise it to the near vertical elevation required at such close range. Soon after, relief arrived.

The support showered the defenders with earth but broke the Adoo, who left behind at least 38 dead. Mirbat became a turning point in the rebellion. Labalaba paid for more valuable time with his life and was posthumously mentioned in despatches. Kealy received the DSO, Sek the DCM, and two other troopers the MM. The unveiling has renewed calls for Labalaba to be awarded the Victoria Cross. 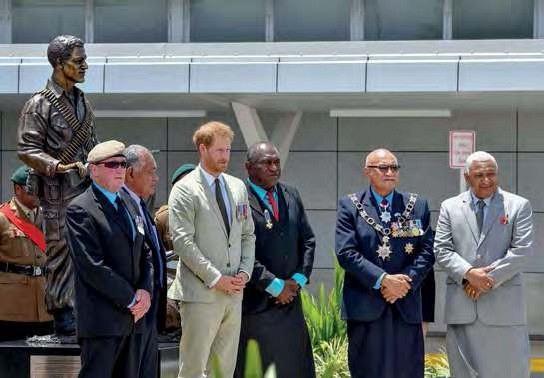 Veterans and dignitaries joined the Duke of Sussex in the unveiling.