A young military history enthusiast is on a mission to get the surviving World War Two British veterans to sign a rifle in an effort to learn more about the men and their stories.

Jay Hawkins, 24, bought a 1939 deactivated Lee Enfield No.1 mk3 SMLE rifle and started the project in August 2021. He has so far managed to get the signatures of 15 veterans who took part in the war. This includes Normandy veterans who landed on the beaches on D-Day in June 1944 to RAF veterans and even a veteran of the Burma campaign named Roy who is so the oldest to sign the rifle at 101. 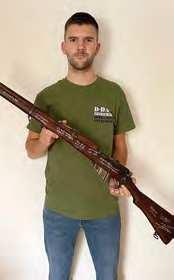 “The project is still on going and my end goal is to have the rifle completely full of signatures of these legends,” said Jay

Jay will then donate the rifle to a museum.

If you can help Jay with his mission, email him at jaythawkins1@gmail.com

MAY I voice another humble opinion about your fine magazine? In your May 2021 issue on page 9 your specs read: Place of Origin: Nazi Germany.