THE FERRET WAS ONE OF THE MOST WIDELY USED BRITISH SCOUT CARS OF THE COLD WAR ERA. AS PART OF OUR WEAPONS OF WAR SERIES, DICK TAYLOR PROFILES THE VEHICLE, DRAWING ON HIS FIRST–HAND EXPERIENCE AS A DRIVER. 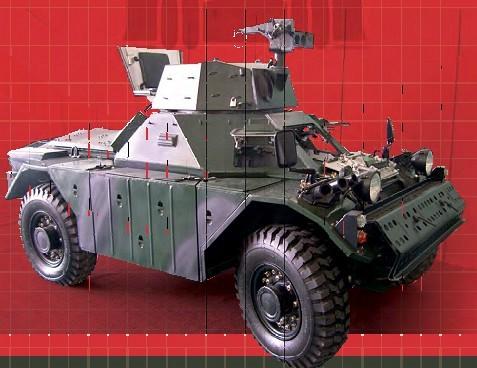 Many Ferrets remain in service in armies, police and paramilitary forces around the world. This is a modernised Jordanian example shown at the SOFEX exhibition in Amma. This very successful 1940s design will likely stay in service for decades to come.
(ALL IMAGES VIA AUTHOR UNLESS NOTED)

At the end of the Second World War, the British Army was operating two main scout cars, the Daimler (DSC) and the larger Humber (HSC). Both were emphatically not designed to be reconnaissance vehicles; rather, they were fast, inconspicuous, lightly armoured run-arounds used for liaison work near the front line. The Daimler, known affectionately as the Dingo, was fairly successful and ubiquitous with more than 6,000 being made, but in May 1947 a replacement was required, which would update the concept and utilise a more powerful engine. Daimler was awarded the contract to design and develop the car the following year, with the prototypes appearing in mid-1950, the design clearly evolving from experience gained on the Dingo.