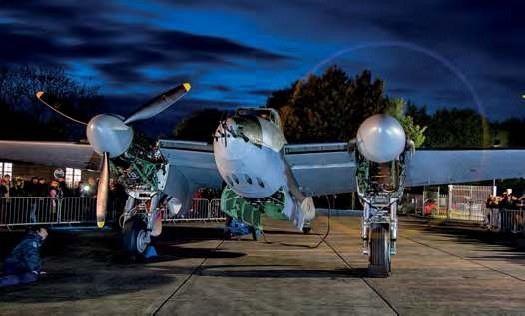 THE PORT Roll-Royce Merlin of Tony Agar’s de Havilland Mosquito NF.II HJ711 ran for the public at a special evening event at the Lincolnshire Aviation Heritage Centre, East Kirkby, on 3 November. The ‘Mossie’ had performed the initial postrestoration engine runs of the left powerplant on the 22 September for the centre’s 30th anniversary special event but this was the first night run.

The last 12 months have seen Tony and the team at the centre reassemble the aircraft and continue the long-term restoration work. It’s very fitting that HJ711 has moved to East Kirkby from its previous base in Yorkshire, as she is reunited with Lancaster Just Jane, which was sold at the same Blackpool auction in 1972 at which Tony purchased his cockpit section.

Tony noted: „I’ve been absolutely delighted with the support of both the team at East Kirkby and the public following the move and we’re working hard to get the engines running as soon as possible“. For more information and to plan a visit, see: www.lincsaviation.co.uk