THE FORT OF WAR

GAVIN MORTIMER DETAILS A BATTLE AGAINST THE ODDS AS EIGHT SBS OPERATIVES AND THEIR ALLIES FOUGHT 600 INSURGENTS AS THEY DESPERATELY TRIED TO RESCUE BRITISH AND AMERICAN NATIONALS FROM A HISTORIC AFGHAN FORTRESS.

A USN F-14D Tomcat, armed with Sidewinders, a Paveway II laser-guided bomb, and LANTIRN Pod, moves in to refuel from a USAF KC-10A Extender. Later, the aircraft completed a precision bombing sortie. 7 November 2001. 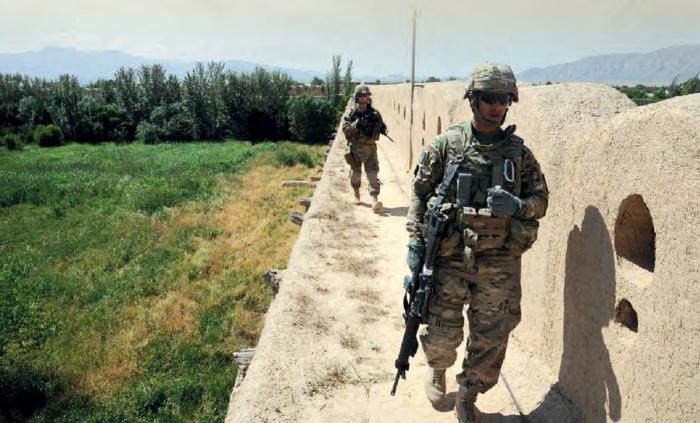 An American NCO leads a patrol along the wall at Qala-i-Jangi in November 2008. The men were tasked with inspecting the memorial for Mike Spann, located in the fortress.
(USAF/S.SGT JAMES BOLINGER)

It was known as the ‘Fort of War’ and from a distance Qala-i-Jangi seemed like something from an earlier century. To reach it from the city of Mazar-i-Sharif in Northern Afghanistan one has to drive along a thin highway, through fields of wheat and cotton, until the road becomes a dirt track and there in the distance are the mud-brick ramparts of the hexagonal Fort of War. An American correspondent who undertook such a journey in November 2001 described his first impression: “The Qala-i-Jangi fortress is protected by walls 60ft high and 30ft thick”, he wrote. “Along the walls are gun turrets and lookouts that have been used to guard against invaders from the British to the Soviets to the Americans.”