In the long history of human conflict, it is only rarely that one may detect a defining moment – an action, an invention, or chance event that changes the course of history. Usually, when such pivotal changes do occur, they will be clear and immediately obvious: in the case of the Jerrycan, there is no such clarity. When German engineers completed the design of the humble 20-litre canister for the Wehrmacht, they had no idea that in that moment they had created a tool which would become an instrument of destruction for the Third Reich.

The story begins in the 1930s. After the German election of 1933, Adolf Hitler was appointed chancellor, and the policy of rearmament was a major factor in the economic success of the Nazi government. From 1935, the Wehrmacht was planning for any future conflict, and developing the Blitzkreig strategy – fast mechanised warfare, relying on swiftly-moving motorised penetration of enemy lines. Fuel shortages could not be allowed, as they would cripple such rapid movement, so the development of some means for each individual unit to carry extra fuel was a priority. A small design team was established at the firm of Schwelmer-Eisenwerk-Muller, in the Ruhr, to develop an effective fuel container. The team, led by Vinzenz Grunvogel, the Oberingenieur or ‘chief engineer’, came up with an enduring example of form following function – the Wehrmacht-Einheitskanister.

Everything about the new container was ‘right’, from the start. Two steel pressings made up the main body, and these were joined together by a recessed welded seam.

Cruciform depressions were pressed into the sides, strengthening the can, and also allowing a small amount of flex to cope with temperature-induced expansion and contraction. The cap operated on a cam principle, ensuring that a tight, leak-proof seal could be obtained, and with the huge advantage that the cap could not be mislaid: an air tube ensured that pouring was smooth and splash free. The shape of the can and placement of the integral spout meant that when filled correctly, an air space existed, so that a full can would float if dropped into water. 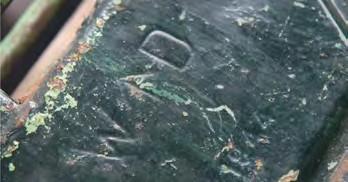 A British War Department 1944-dated, Jerrycan in the condition it was found at a French fleamarket

At the top, three handles were fitted – this enabled cans to be passed swiftly along from one man to another, and also that two full or four empty cans could be carried by one man. Hugely satisfied, the Wehrmacht built up enormous stockpiles of the highly secret containers prior to the outbreak of war in September 1939.

Despite the secrecy, by a strange twist of fate, three cans, which were ultimately to play such an important part in the defeat of the Nazis, were to be spirited out of Germany in the summer of 1939. An American engineer named Paul Pleiss had been working in Berlin. As the contract had ended, he planned to drive overland to India, and recruited a German colleague to join him on the adventure. 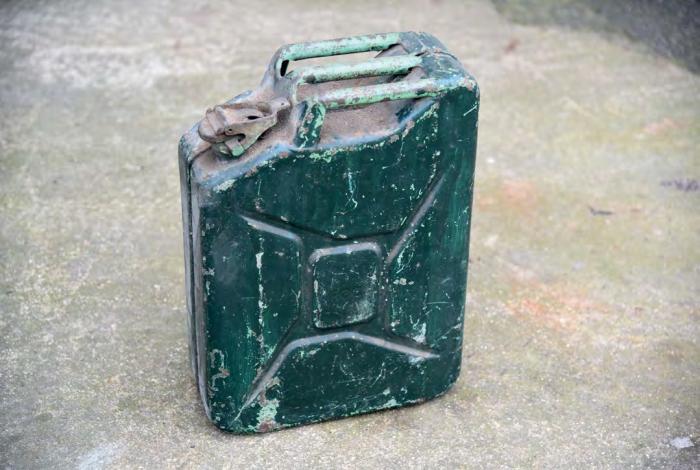 Shortly before departure, they realised they had no containers for spare water. The German had a solution, however – he knew that thousands of cans were being stored at Templehof airport, and in some mysterious way acquired three. As the world drifted towards war, the adventurers set off, driving through 11 countries on the way. At some point, with the onset of hostilities imminent, Pleiss’ companion was recalled to the Fatherland. Undeterred, the American continued on to Calcutta, and put the car, and the Jerrycans, into storage, before flying home.

Some time later he had the car and the three cans shipped to his home in the USA – an action of great significance, as we will see later.

The British Army was not best prepared for war in September 1939. Little thought had been given to the logistics of fuel movement and the need for manageable, efficient containers. Two types of fuel can were in service: a two-gallon, pressed steel model, based on the standard civilian petrol can, and a four-gallon rectangular model made of soldered tinplate. Both were inadequate for the purpose. The two-gallon type had a handle and filler cap projecting on the top face, making the cans difficult to stack and vulnerable to damage. The four-gallon type was even worse. Its construction meant that it was so weak that lower rows would crush if the cans were piled up, and the filler was prone to leakage. They became known as a ‘Flimsy’, a name which tells us much!

During the Norwegian campaign of May to June 1940, the British forces became aware of the Wehrmacht canister, and of how efficient it was. It cannot be determined whether any samples were captured, but that did not matter, as Paul Pleiss, now apparently an officer in the US Army, arrived in London, and had access to contacts at the War Office. He was asked to provide a sample of the German can, and one was quickly sent from his home in Philadelphia.

At the Pressed Steel Company Ltd works at Cowley, the Jerrycan was reverse-engineered, and then copied exactly. Paul Pleiss wrote a paper on the subject for the Ministry of Supply. That document is stored in The National Archives, as file number AVIA 38/557 – ‘Manufacturing technique by Paul Pleiss: Pressed Steel Company, Oxford, England’. The government then commissioned orders for the manufacture of huge quantities for the armed forces.

While stocks were being built up, the war of course, was continuing. In North Africa, the 8th Army, still equipped with the ‘Flimsy’ cans experienced numerous setbacks caused by fuel shortages. Losses were estimated at between 30 to 40%, as the containers were so fragile, and the evaporative losses from the screwed or pressed fillers were exacerbated by the temperature differences between day and night.

General Auchinleck, in overall command of operations in North Africa, wrote that on many occasions the ‘Flimsies’ were found to be half empty when opened. Captured enemy Jerrycans were greatly prized, and were instantly taken up for use by the Long Range Desert Group on their missions.

Back in Britain, production was increasing during 1941 and 1942, but the rate was slow, as each can was hand welded using oxy-acetylene – it was taking 15 to 20 minutes to weld the two halves together and fit the spout.

As production speeded up, deliveries increased, and as the Desert Rats prepared for the battle of El Alamein, more than two million Jerrycans were part of the logistical support chain…