Down in the murky depths of the ocean, the wrecks of seven Allied warships sunk in the Battles of the Java Sea have disappeared, reports John Ash. 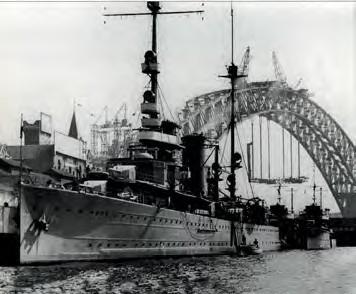 Java moored in Sydney in 1930, behind her are the destroyers De Ruyter (renamed Van Ghent in 1934, not to be confused with Doorman’s flagship) and Evertsen. Van Ghent was scuttled on 15 February 1942.

INVESTIGATIONS HAVE begun after the discovery that the wrecks of several sunken Allied warships have ‘disappeared’, and suspected to have been plundered for scrap, off the coast of Indonesia. The Dutch Ministry of Defence reported the vanishing on 16 November after attempts to film three of the wrecks in preparation of a new exhibition and hopes of placing commemorative plaques. The missing Dutch ships are the light cruisers HNLMS De Ruyter and Java, and the destroyer HNLMS Kortenaer. In a statement, the Dutch MOD said: “The desecration of a war grave is a serious offence” and disclosed that the two cruisers seemed to have been completely gone, with little remaining of Kortenaer. The Dutch authorities have since announced intentions to widen the scope of their investigation to include more wrecks. 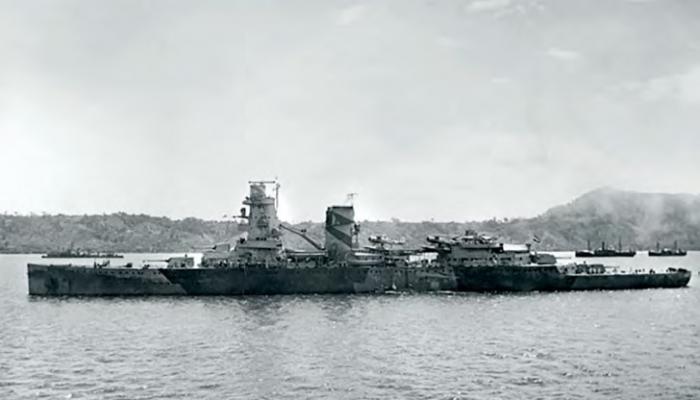 Admiral Doorman’s flagship, De Ruyter, at anchor shortly before the Battle of the Java Sea, camouflaged in the two-tone grey splinter pattern common to Dutch ships. She was lost with 344 of her crew, including Doorman. 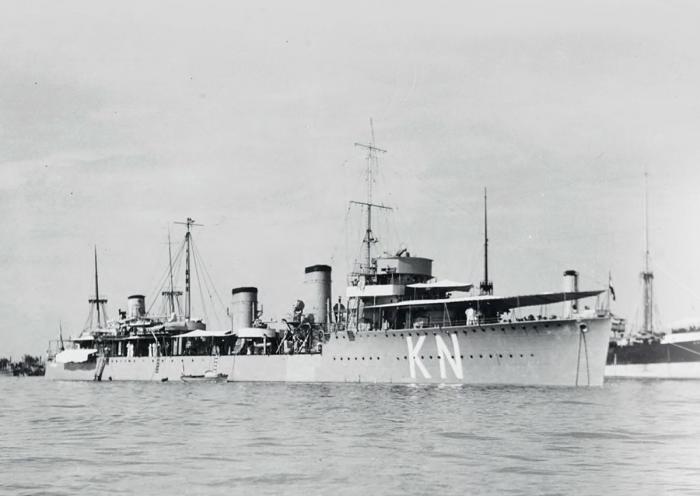 The destroyer Kortenaer at anchor at Batavia, Dutch East Indies, in 1931, taken from the USS Black Hawk.

Dutch Defence Minister Jeanine Hennis told MPs of the disappearances on 15 November, before the news publicly broke. “The Battle for Java Sea is part of our collective memory”, she explained. “The wrecks bear silent witness to the tragic events and form a backdrop to the many stories about the terrors of war and the comradeship between crew.” The story has caused outrage in the Netherlands and one newspaper, De Telegraaf, ran the front page story under the headline “Mystery in the Java Sea”.

However, British ships were also sunk in the engagement and the UK’s Ministry of Defence have confirmed it contacted relevant authorities after reports emerged Royal Navy vessels have also been affected. Concerns regarding the state of the wrecks of HMS Exeter, HMS Encounter, and HMS Electra increased after scans revealed similar damage and disappearances. The 3D mapping report showed severe destruction to four British and American vessels. The heavy cruiser Exeter, well-known for her part in the destruction of the pocket-battleship Graf Spee, is said to be all but gone, likewise the destroyer, Encounter. A large part of HMS Electra is said to remain, however. Although much of Exeter’s crew were saved, 54 are still at their action stations and eight were lost on Encounter which also carried survivors from Kortenaer. Most of Electra’s 145 crew are thought to have died, in addition to a number who had been rescued from other ships.

The UK’s MOD, recently criticised for failing to protect Jutland wrecks in the North Sea, stated that any such matter where war graves are involved is taken seriously, although it admits it is struggling with the sheer number of Royal Navy wrecks across the world. Officially, the three British wrecks are not yet protected. Nevertheless, the MOD confirmed the reports with a spokesman stating, “Many lives were lost during this battle and we would expect that these sites are respected and left undisturbed without the express consent of the United Kingdom.” The organisation has condemned the disturbances and requested the sites be protected from further damage. On 17 November, Dutch news reported the UK’s MOD was beginning an official investigation.

Dozens of warship wrecks litter the seabed around Indonesia, Singapore, and Malaysia, each now under a common threat. Commercial salvaging causes substantial upset among veterans, historians and governments vying to preserve the resting places of the ships and sailors. However, this does little to dissuade illegal salvage activities when the potential profits of £2,000 per tonne of phosphor bronze propeller material, for example, are so lucrative. Additionally, long sunken steel is highly valued for advanced technological products, as it is uncontaminated by radioactive pollutants. Several wrecks have been affected, including outside of the Java Sea, such as HMS Prince of Wales and HMS Repulse, both sunk in the very beginnings of the war with Japan. 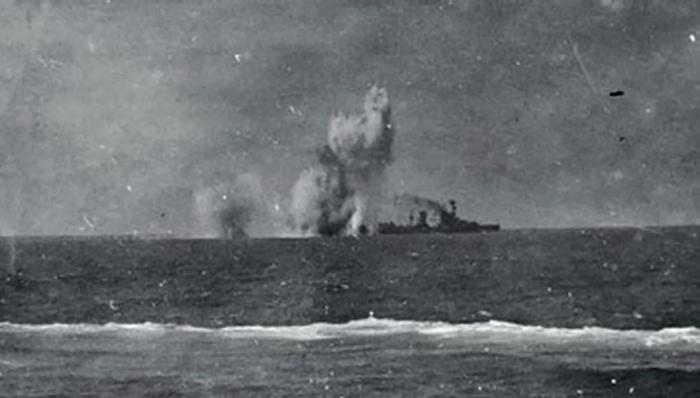 Java under fire during the Battle of the Java Sea, possibly showing the torpedo hit to her aft, just 15 minutes before she sank after losing her stern.

Repulse sits at some 55 metres, a remarkably easier salvage than her companion, Prince of Wales, resting 67 metres under the surface. The three Dutch vessels are around 70 metres down, and experts say salvaging at that depth would have been a huge operation and unlikely not to have been noticed.

Although unclear at this stage if affected in this instance, previous illicit salvage activity on the Australian cruiser HMAS Perth has long been known about and the subject of much controversy, although previous operations have not extended to such devastating extent. Also known is the previous salvage of Dutch submarine O16, sunk by a mine in 1941.

However, not all believe the ships are the victims of extensive salvage, although if another cause is to blame there is little to explain the sudden disappearances – other than shifting caused by storms or the 2004 Boxing Day tsunami. That said, the ships would have slowly filled with sand over the years, increasing their weight substantially, making shifting less than likely. These are all large warships, with Exeter, De Ruyter, and Perth all in excess of 170m in length, and thousands of tonnes in weight, with Java being slightly smaller. The submarine USS Perch, also disappeared in its entirety, and was around 90 metres in length.

A representative of the salvage firm Mammoet told Dutch newspaper, Algemeen Dagblad, that such an operation was bordering on the impossible because of the extreme depth. Other experts explained a salvage project of this scale would require large cranes and larger vessels, and could not be completed quickly. 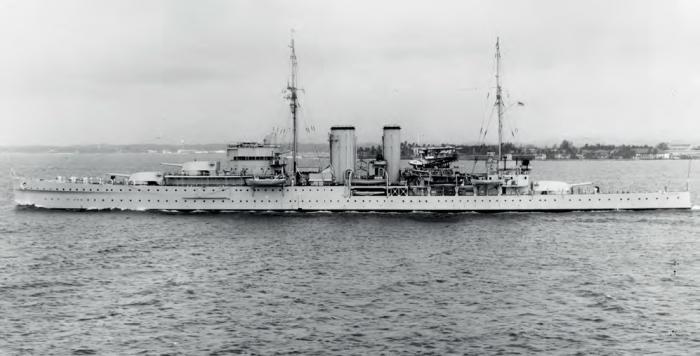 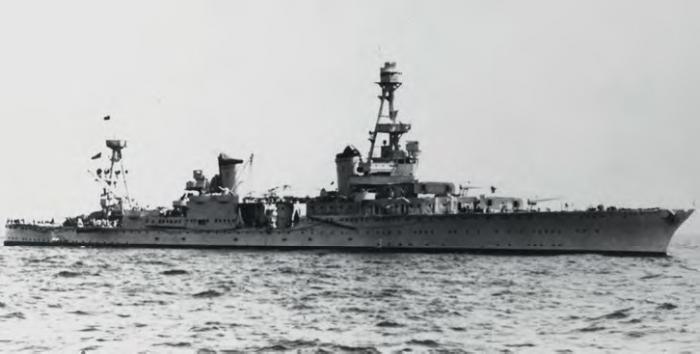 The Indonesian Navy stated they were unaware of the disappearances as local authorities distanced themselves from the mystery, although are prepared to set up a joint investigation team. A spokesman admitted that should claims of illegal salvage be true, the operations may have taken years. Indonesia’s National Archaeological Centre argues they were never asked to protect the sites and could not do so alone, although a UNESCO convention is supposed to ensure protections of all sensitive wrecks. If the allegations are true, this is not expected to be down to salvagers posing as fishermen; rather, it is thought the warships were blown apart by explosives to facilitate plundering.

At the time of the First Battle of the Java Sea on 27 February 1942, it was the largest surface ship engagement since Jutland and still remains one of the largest sea battles of the 20th Century. It was also one of the costliest, with some 2,300 Allied sailors killed. The Japanese, led by Takeo Takagi, lost just 36 men. Among the dead was war hero Admiral Doorman, who was one of among 900 Dutchmen and 250 Indo-Dutch troops who went down with the ships. At least 386 British sailors died in the battle - each is commemorated on memorials, the figure including those who died as prisoners of war.

The battle was fought between a hastily assembled alliance of four navies, ABDACOM – American-British-Dutch-Australian Command, and the Imperial Japanese Navy. The invasion of the Dutch East Indies had progressed at an alarming pace and, twice, Allied ships had been defeated as land forces were pushed back. Darwin, a major port in Australia, was in range of land-based aircraft and also vulnerable to carrier strike.

A cruiser under attack as pictured from a Japanese aircraft. This is most likely HMS Exeter.

Most of the ABDACOM fleet had been damaged, the USS Houston went into action with a third of her 8in guns inoperable which meant that Japanese heavy cruisers, each with ten 8in guns, were even more potent.

The Allied ships engaged in poor weather during a seven-hour battle from about 1615 hours. In the beginning, both sides were firing ineffectively, including HMS Exeter with her new gunnery control radar. However, Exeter was hit and damaged by the Haguro, and forced back to Surabaya. Two salvos of Japanese torpedoes, 92 in all, were also fired, hitting Kortenaer and breaking her in two - another success for Haguro.

HMS Electra, meanwhile, ran out of ammunition engaging Jintsu and Asagumo after scoring several hits on the latter, forcing her to retire. However, in turn, Asagumo also sank her. That evening, their torpedo ammunition expended without success, the four US destroyers retired. At 21:25 HMS Jupiter, which had sunk the Japanese submarine I-60 a month earlier, hit a mine laid by the Dutch ship Gouden Leeuw, and sank, and at 23:00, with his command reduced to four cruisers, Doorman attacked again. However, torpedoes struck his ship, De Ruyter, and the Java - both of them sank, claimed by the Haguro. Only 111 were rescued. Doorman’s last command was to order Perth and Houston to retreat to Tanjung Priok.

Both Perth and Houston, along with the HNLMS Evertsen, were sunk in the Sundra Strait at midnight on 1 March, when the ships battled an invasion fleet consisting of a carrier, at least three - possibly five - cruisers, 12 destroyers, and 60 troopships and other vessels. A further 1,071 were killed. Japan lost four troop ships and a minelayer, at least one to friendly fire, with 10 killed. Exeter was also sunk on 1 March in the Second Battle of the Java Sea when sailing with the USS Pope and HMS Encounter. All three ships were destroyed after being encircled by Takagi’s cruisers and 800 sailors captured, 190 of them dying in captivity.

The battles saw ABDACOM massacred, a lack of cross-training and compatible equipment counted against them in battle against a highly-skilled Japanese force. ABDACOM fought on, but with air forces moving to Australia, ten ships lost and the rest withdrawn, the last Dutch, Indonesian, and British troops surrendered on 9 March. Control of the fourth largest producer of oil went to Japan, the gallant and costly efforts of ships having bought just one day for the defenders on land.

Theo Doorman, 82, son of legendary Rear Admiral Karel Doorman, who commanded the ABDACOM force, was accompanying an exhibition which hoped to mark the 75th anniversary of the battle. He stated there was nothing but an empty groove where his father’s ship, the De Ruyter, once rested. He simply said, “I was sad”. Adding: “…for centuries is was a custom not to disturb sailors’ graves. But it did happen here.” 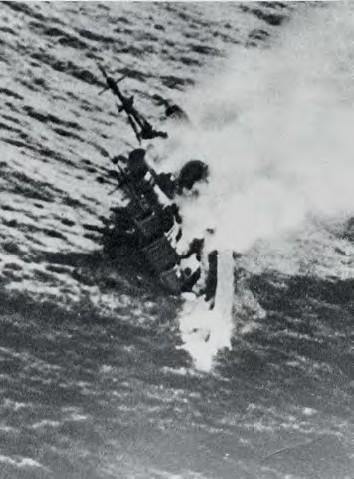 HMS Exeter rolls over and sinks, 1 March 1942 after being torpedoed by the Japanese destroyer Inazuma. This Japanese photo was captured by American Forces on Attu Island, Alaska in 1943