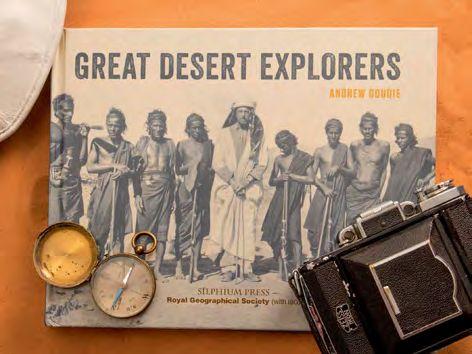 Toby Savage read this book and enjoyed it so much, he wanted to share it. He reviews it here; Andrew Goudie’s latest desert- themed masterpiece, on the back of Light Car Patrols 1916-19, scratches away the crusty veneer of about 60 of the most intrepid and fearless explorers ever to venture into the vast wastelands of the world’s deserts.

Many did it purely for the thrill of being the first there, others were subjecting themselves to the arid regions of the planet for military reasons. One such hero was Captain William Henry Irvine Shakespear who was born in Pakistan and educated at Sandhurst. Lawrence (of Arabia) described Shakespear as having ‘an abiding contempt for everything native’. Perfect for defending the Empire!

He had a healthy fascination for the motor car and in 1907 drove an 8bhp Rover home to England from the Middle East. Most Victorian and Edwardian explorers relied upon the camel of course, but a few saw the big advantages of the car. Sir Bede Clifford made the first crossing of the Kalahari in 1928 using six-wheeled Morris trucks. John Ball, ‘the little doctor’ used the Model T Fords as part of his work with the Light Car Patrol.

This book is laced with endless charming anecdotes and quotes describing an era of exploration now lost to us forever, when much of the globe was coloured in pink and all you needed was a stiff upper lip.

It is very well laid out and invites readers to opt for a short, but detailed analysis of both the explorers and the deserts they explored. On a more gruesome note it also pays homage to those less fortunate in their adventures. A terrifying list early in the book catalogues 36 of those who did not return: ‘James Wellstead, aged 37, died of fever, attempted suicide and madness’!

It is meticulously researched by Goudie, (onetime honorary secretary and vice-president of The Royal Geographical Society, and something of a desert explorer) providing many of the location photographs to supplement the original black and white images taken by the explorers. Available through all of the usual sources for about £30.