Throughout the First World War, the many announcements of British and Commonwealth gallantry awards appeared in the various issues of The London Gazette. As part of our major monthly series covering the period of the Great War commemorations, we examine some of the actions involved and summarise all of the awards announced in May 1917. 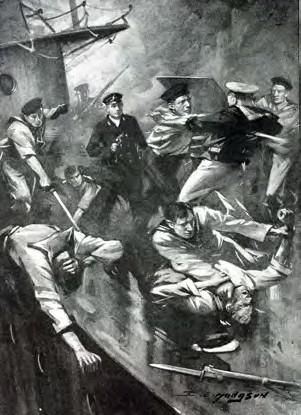 A contemporary artist’s depiction, ‘based on the accounts of eyewitnesses’, of the hand-tohand fighting on board HMS Broke following the ramming of the German G.42.
(ALL IMAGES HISTORIC MILITARY PRESS UNLESS STATED OTHERWISE)

A NUMBER of the gallantry awards announced in May 1917 were the result of what has become known as the Second Battle of Dover Strait. By the latter half of the First World War the German Navy’s surface fleet was limited to hit and run raids across the Channel. Indeed, the Germans had collected a strong force on the Flanders coast within striking distance of the English and French Channel ports. Well aware of the threat the German craft posed to the vital communications link across the Channel, a standing patrol of British destroyers patrolled the Dover Strait.