BEFORE Helles FROZE OVER

In January 1916, and with winter biting, it was the turn of the 40,000 men at Cape Helles to leave Gallipoli. But, as Peter Hart explains in part II of his feature, some doubted evacuation was even possible

Following the successful evacuations of Suvla Bay and Anzac Cove in December 1915, there was one question on everyone's lips: “What are we going to do now?” 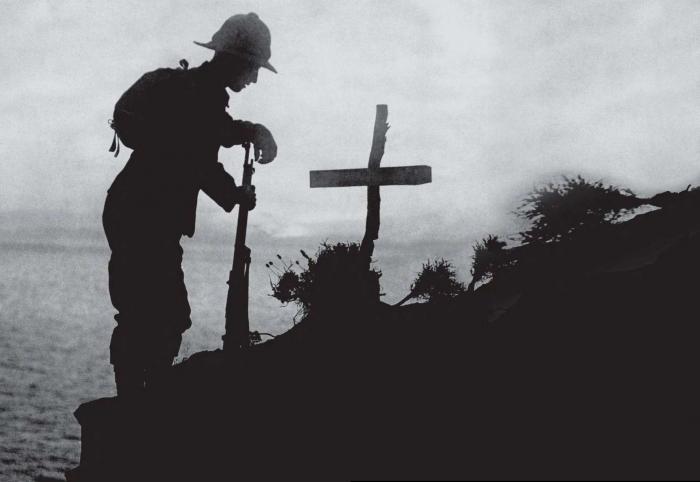 A BRITISH SOLDIER PAYS HIS RESPECTS AT THE GRAVE OF A COMRADE NEAR CAPE HELLES. THE EVACUATION OF HELLES BROUGHT THE GALLIPOLI CAMPAIGN TO AN END. THE EIGHT-MONTH BATTLE RESULTED IN 56,000 ALLIED AND 56,000 TURKISH DEAD

The move left the 40,000-strong VIII Corps garrison marooned at Cape Helles, at the tip of Turkey's Gallipoli peninsula. The British government, senior officers in the Royal Navy and British Army, the great British public – and the Turks – were baffled as to what would happen next.

In the short term, it had been decided to retain Helles, but would this situation persist for the duration of the war, and what was the end goal? Furious debate raged: could Helles function as a base for future operations to be launched in summer 1916? What was the point of leaving so many men at the mercy of the Turks, of winter, and of the depredations of disease? There had been calls to maintain the position permanently to prevent U-boats entering the Mediterranean from the Black Sea should a base be established at Constantinople, but did the Royal Navy need such huge investment in manpower and resources to assist them in the war against submarines in the Mediterranean and Adriatic?