TWO VETERANS of Operation Dynamo, the desperate but miraculous evacuation of British and Allied troops from Dunkirk in 1940, have passed away within weeks of each other, Britain at War is sad to announce.

Both resided in southwest England and had unique stories to tell about their experiences of a disastrous summer of fighting in France.

Arthur Taylor, of Christchurch, Dorset, joined the RAF and was deployed to France as a groundbased radio operator. Making his own way to Dunkirk, Arthur queued in lines 20 men wide for 36 hours in order to be rescued by the ‘little ships’. He felt compelled to swap his blue tunic for army battledress to escape unwarranted criticism of the RAF’s involvement in proceedings, perceived as minor by the troops. In the ensuing and incessant shelling and air raids, Arthur endured the bombardment and strafing and saw the man next to him cut down before, finally, being evacuated by the armed trawler Lord Grey on 30 May 1940.

Taylor’s strong resolve was the embodiment of the ‘Dunkirk’ spirit and served him well in the Battle of Britain, where he worked on Spitfires at RAF Hawkinge and RAF Lympne, both in Kent.

He married his life-long partner, Vera, in 1941. Demobbed post-war, Arthur rejoined the RAF and served for 36 years, which included time during the Malayan Emergency. In later life he was consulted by director Christopher Nolan as he produced the 2017 film Dunkirk. Arthur Taylor died, aged 98, on 28 December 2018, following a fall. Arthur’s funeral took place on 1 February in Bournemouth and his coffin was draped with the flag of the Association of Dunkirk Little Ships. Two buglers were among those present and a minute’s silence was held during the service He is survived by his wife, six children, 13 grandchildren, and 12 great grandchildren.

Garth Wright, served in the Royal Artillery, having joined before the war. Within days of war being declared, Garth was deployed to northern France where he drove the tractor for the Bofors 40mm gun and later took on the role of despatch rider – racing between Lord Gort’s HQ and his regiment’s position on a Norton motorcycle, on one occasion enemy fire hit the machine’s mudguard. Evacuated from the mole by the destroyer HMS Codrington, Garth described his 48-hour experience waiting for rescue as ‘hell on earth’, taking cover among the ‘blessed’ sand of the dunes to avoid bombing and strafing runs that quickly became routine. 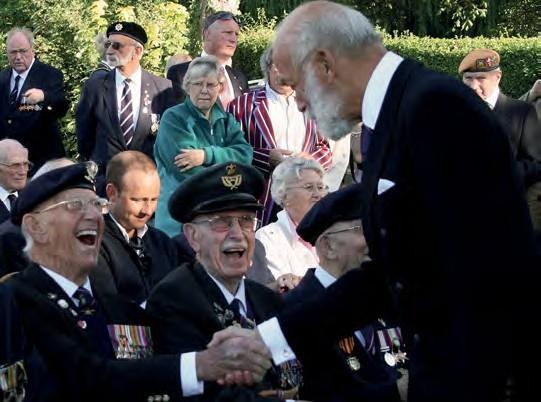 Garth Wright and Arthur Taylor with HRH Prince Michael of Kent at a ceremony at Dunkirk.

Following the evacuation, Garth served as part of the 6th Armoured Division in North Africa, staying with that formation all through the war in the desert. He remained with the division as it deployed to Italy, and Garth participated in the bloody battle for Monte Cassino in 1944. After the war, Garth worked on the buses, but as a keen bugler he performed at his local team’s football ground, at commemorative ceremonies in France and Belgium, and even The Last Post at the Menin Gate. Survived by his son and two daughters, Garth Wright passed away on 19 January 2019, aged 99. His funeral took place on 4 February in Plymouth’s St Andrews Church, which was filled to capacity. A brass band, two buglers, and a number of serving Royal Artilleryman were among those present.

The number of Dunkirk veterans surviving is now thought to be below 20.