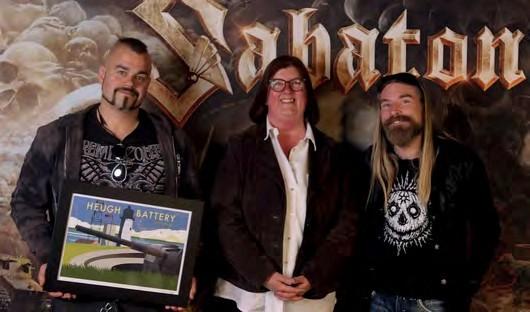 HARTLEPOOL’S HEUGH Battery Museum has been saved from closure after a Swedish heavy metal band helped pushed the fund-raising efforts over the museum’s £5,000 target.

Sabaton – which bases its songs and lyrical themes on events in warfare – was looking for locations for a photoshoot ahead of the release of its new album, The Great War, when it heard about the museum’s struggle to remain open.

The award-winning band, being passionate about military history, released a charity T-shirt showing one of Heugh Battery’s guns and within days its fans had donated £4,220. “The money will ensure that the museum will be able to pay its basic outgoings for the next 18 months,” manager Diane Stephens told Britain at War. “It will give us the opportunity to go to other funders now for some longer-term projects to secure the museum’s future.”

Heugh Battery is the only Great War battlefield in the UK and is the site of the first British soldier slain on British soil during the conflict, commonly believed to be Private Theophilus Jones of the 18th Durham Light Infantry.

During the terror bombardment of Hartlepool and West Hartlepool (‘the Hartlepools’) on December 16, 1914, Heugh Battery returned fire on the German Navy with its two 6in BL Mk.VII guns (a third gun was positioned near the lighthouse). Nine of the battery’s defenders were killed and 12 wounded, while 119 civilians in the two towns were killed with more than 400 wounded.

Heugh Battery Museum is located on the Headland, Hartlepool, and opens Friday to Monday, 10am until 5pm.