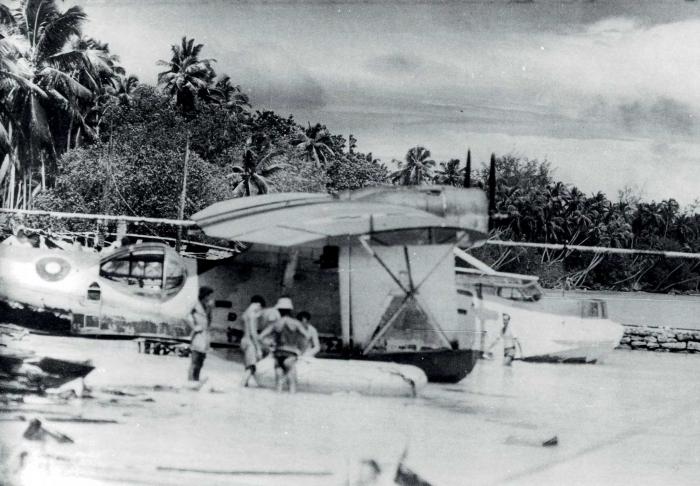 A CATALINA BEACHED FOR MAINTENANCE AT THE FORWARD BASE AT DIEGO GARCIA. FROM HERE, SEARCH SORTIES WERE FLOWN TO FIND THE SURVIVORS LEFT IN I-8'S WAKE ALL IMAGES VIA DR ARTHUR BANKS UNLESS OTHERWISE STATED

Having swept all before them in the Pacific and South East Asia, in early 1942 the Imperial Japanese Navy (IJN) ventured into the Indian Ocean, attacking shipping in the Bay of Bengal and mounting strikes against Ceylon (now Sri Lanka).

Although the Allies implemented a convoy system in the Indian Ocean, faster vessels often sailed independently from South Africa, India or the Red Sea and on to Australia. Recognising the significance of these sea routes early on, the Germans despatched commerce raiders and U-boats to operate in these waters. The submarines replenished at Penang in conquered Malaya, which the IJN had developed as the main base for its own operations in the theatre.

One IJN submarine to sortie was I-8. This was one of Junsen Type J-3 class vessels and was huge – she and her sister ship I-7 were the largest Japanese submarines completed before the war. Almost 360ft long and displacing more than 2,500 tons surfaced, I-8 had a range of 14,000 nautical miles, was well armed, and carried a Yokosuka E14Y ‘Glen’ floatplane. In 1943, her great endurance enabled it to sail to occupied France and return with vital German technologies intended for Japanese industry.