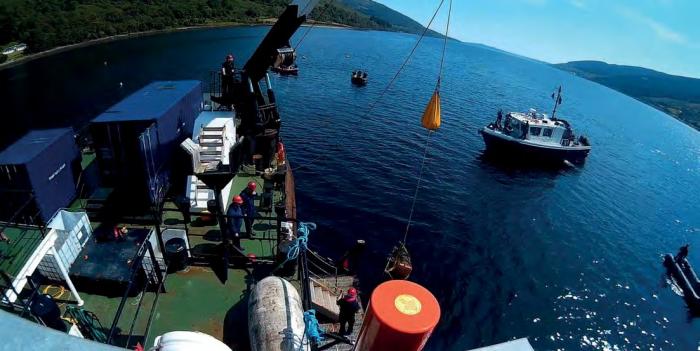 The view from the bridge of Cato as the recovery work gets underway. (COURTESY OF DR IAIN MURRAY)

ON WEDNESDAY, 19 July 2017, three Highball bombs broke the surface of Loch Striven for the first time in more than seventy years. They were among as many as 200 of the Barnes Wallisdesigned munitions tested on the loch ahead of Operation Chastise.

It was early in 1942 the idea of a ‘bouncing bomb’ was first considered by Barnes Wallis and initial plans and tests saw him develop a spherical bomb. By September 1942 test drops of this design were conducted at Chesil Beach in Dorset, the results of which led to the authorisation for the development of two variants of the ‘bouncing bomb’. The first was a small spherical mine codenamed ‘Highball’, the second was the larger ‘Upkeep’. The Highball bomb was around three feet in diameter and weighed 1,200lbs. Though described as spherical, it had flattened sides.