HMHS Anglia And The Live Bait Squadron Given Legal Protection 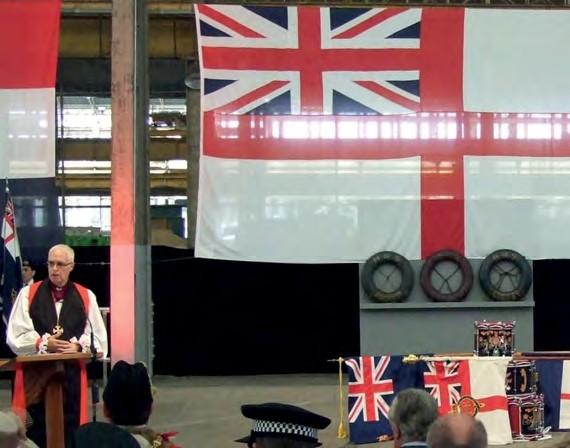 The Bishop of Rochester at the drum Head ceremony commemorating the centenary of the sinking of the “Live Bait Squadron” on 22 September 2014. Three life belts recovered from the ships form part of the backdrop.

THE LONG running campaigns to protect the wrecks of Hospital ship HMHS Anglia off Folkestone and the three cruisers of the, so called, “Live Bait Squadron”, HMS Cressy, Hogue and Aboukir, off the Dutch coast have finally succeeded with the UK Government’s announcement that all four wrecks are now protected under the Protection of Military Remains Act [PMRA]. Designation protects the wrecks from all unauthorised intrusions by divers and salvage vessels if the wreck lies in UK territorial waters, and by UK companies and nationals if the wrecks lie elsewhere. The new designations also include nine other naval vessels and auxiliaries, leading to hopes the Government is moving, albeit slowly, towards a situation where all military craft lost on active duty, are protected under the Act.

Responding to the announcement, Henk van der Linden, who set up the Anglo- Dutch “Live Bait Squadron Society “ to record the history of the three cruisers and the British, Dutch and German sailors caught up in their story, told Britain at War: “The members of the “Live Bait Squadron Society” are delighted the graves of 1459 Royal Navy personnel, including many relatives, are finally being recognised as deserving legal protection. I think we have shown that, even if it takes longer sometimes than we might like, when people reach out across the sea and across borders to work together we can persuade our politicians to do the right thing and protect the heritage we all care about.”

Robert Yorke, Chair of the Joint Nautical Archaeology Policy Committee, an independent expert body which advocates on behalf of maritime archaeology, also greeted the news positively, telling us: “The JNAPC has been seeking the designation of HMS Cressy, HMS Hogue and HMS Aboukir, for some time and so it is absolutely delighted that the MOD has recognised that protection should now be granted.” HMHS Anglia was mined off Folkestone on 17 November 1915 sinking in only fifteen minutes with the loss of 164 lives. Most casualties were injured soldiers, trapped on the lower decks of the ship. Professional Archaeologist and Maritime Specialist Dr Peter Marsden has campaigned for her wreck to be protected, and while pleased the campaign has been successful, he remains critical of the time the Ministry of Defence took to protect the wreck:

“I am delighted that HMHS Anglia has been added to the list of protected wrecks,” he told Britain at War “but I am saddened that the MOD’s responses have been not to protect the wreck, and that it was only when English Heritage (as was) ran a sonar survey that the MOD relented.”

Dr Marsden added, “We have a long way to go. In my view there are too many government departments and laws controlling historic wrecks…My view is that the whole issue is cultural and should be under the Department for Culture, Media and Sport as this will avoid confusion and the triplicated administrative costs incurred as each department does its own thing.”

Other vessels designated include the transport SS Armenian torpedoed on 28 June 1915 with the loss of 29 of her crew mostly Americans, as well as her cargo of 1400 mules; the submarines HMS E47, and HMS E49; light cruiser HMS Falmouth, and Q-Ship HMS Lady Patricia. Also protected are Armed Merchant Cruisers HMS Laurentic and HMS Moldavia, the latter sunk off Beachy Head by German submarine UB57 on 23 May 1918 with the loss of 56 American soldiers. The destroyer HMS Pheasant, mined off the Orkneys on 1 March 1917 and another Armed Merchant Cruiser, HMS Viknor, lost off Donegal with all 295 of her crew on 13 January 1915, complete the list.

The new designations come at a time of increased sensitivity regarding lost warships. In May 2016 it was revealed Dutch salvage company Friendship Offshore had removed illicitly tons of non-ferrous metals, from the designated wrecks of HMS Indefatigable and HMS Queen Mary, lost at the Battle of Jutland. While in November 2016 a Dutch expedition researching the 1942 Battle of the Java Sea found the wrecks of vessels including Dutch cruiser HNLMS De Ruyter and the famous British cruiser HMS Exeter, had been effectively obliterated by unlawful salvage.

Maritime Law expert, Michael Williams, a Visiting Research Fellow at the Law School, Plymouth University, summarised the legal importance of the new designations: “The inclusion of the three cruisers off the Dutch coast is significant because they had previously been the subject of a salvage agreement concluded by MOD with a commercial concern and their present ownership is considered by MOD to be uncertain. MOD had considered both these factors to be a legal bar to designation under the 1986 Act. However, following extensive legal representations by the JNAPC, the MOD have conceded that neither of these factors is such a bar. This is an important step forward.”

The death throes of HMHS Anglia on 17 November 1915 were caught on camera. Here HM Torpedo Boat No 4 closes to pick up survivors.

A contemporary Artists impression of the sinking of HMS Cressy, HMS Hogue and HMS Aboukir, off the coast of Holland on 22 September 1914. One thousand four hundred and fifty nine Royal Navy personel died in the sinkings by the single submarine U9, not the multiple submarines shown by the artist here.

However, Mr Williams also pointed out the restrictions apply only to British flagged vessels and nationals, suggesting British ratification of the UNESCO Convention on the Protection of the Underwater Cultural Heritage would provide a more powerful mechanism to protect WW1 wreck sites.

Mr Williams added, “All the designations in the world only ultimately confer protection if MOD is prepared to act resolutely when alerted to unauthorised interference and here the picture is mixed. This is where constituencies such as the marine archaeological community, maritime historians, service veterans and indeed the readership of magazines such as Britain at War can make a real difference by voicing their disapproval of any inertia in responding to such desecration. Government departments’ priorities can and do change when faced with public disapproval.”

Britain at War asked the Ministry of Defence how it would ensure that the latest designations will be respected. A spokesperson responded:

“Under International Law naval warships and associated artefacts enjoy protection through Sovereign Immunity. International law also provides for protection for war graves. Desecration of wrecks of war and merchant vessels causes distress to loved ones of those lost on board and is against international law.

It is British Government policy that our military wrecks are offered appropriate protection and management. A military wreck should remain undisturbed and those who lost their lives on board should be allowed to rest in peace.”

Pointing out that the sheer number of military wrecks around the world limited what protection could be provided, the spokesperson added “…we will continue to work with regional governments and partners to prevent inappropriate activity on the wrecks of Royal Navy vessels. Where we have evidence of desecration of these sites, we will take appropriate action.”

Asked why the Government does not mirror the practice under the United States “Sunken Military Craft Act” and protect all UK military ships and aircraft lost on active duty anywhere in the world, the spokesperson replied: “The Royal Navy will continue to use Sovereign Immunity and British laws to protect wreck sites.” 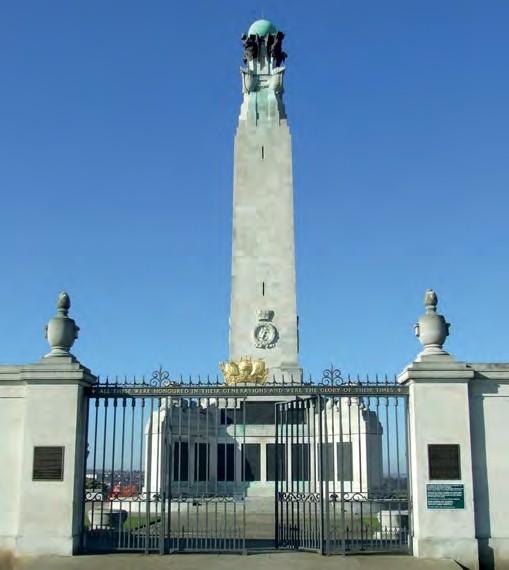 The Royal Navy Memorial to the Missing at Chatham, where the casualties of the Live Bait Squadron whose remains were never recovered and those lost with other ships from the Chatham Depot are commemorated.