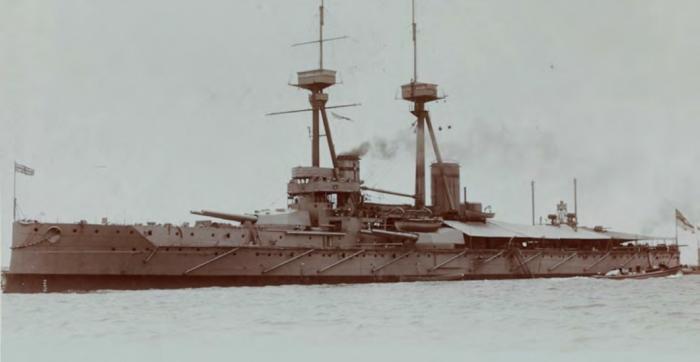 THE WRECK of HMS Vanguard has been surveyed ahead of the centenary of her loss on 9 July 1917. The survey, which involved both photographic and 3D image scanning of the protected war grave, was announced last autumn and it was hoped the results would shed light on what caused the battleship to sink in one of the most tragic accidents in the history of the Royal Navy.

The eight-year-old vessel was a veteran of the Battle of Jutland, where she helped cripple the light cruiser SMS Wiesbaden, and when firing at German destroyers that evening became the last ship to fire her guns in the battle. She had also sallied with the Grand Fleet on 19 August 1916, to force back a raid on Sunderland.

On the day of her loss, none aboard the ship, who had that day drilled procedures for abandoning ship, detected anything amiss until the first explosion at 23:20.

The subsequent disaster claimed all but two of the dreadnought’s 845 crew when she exploded at anchor. Among the dead was Captain Kyōsuke Eto, an observer from the Imperial Japanese Navy, which was allied with the Royal Navy.

The survey was completed by a team from SULA Diving, Seatronics and Teledyne Reson, working from the MV Huskyan and in conjunction with the University of the Highlands and Islands Archaeology Institute. The wreck lies some 110ft down and the vast debris field was also recorded.

Dive survey organiser Emily Turton stated: “The purpose of the survey is to tell the story of HMS Vanguard at 100 years underwater and to offer a sensitive contribution to the centenary commemoration in 2017.”

The first findings support the conclusion Vanguard was lost after a huge internal explosion behind her bridge. Ms Turton commented: “Surprisingly, given the nature of her loss, both the bow and stern are intact despite large pieces of wreckage having being thrown hundreds of metres away.” This gives additional weight to witness statements, which described a large explosion occurring immediately behind the bridge, an indicator of a magazine explosion.

Though this turn of events had long been accepted the actual course of events resulting in the strongly-suspected catastrophic cordite explosion are still unknown. The inquiry into the loss examined witnesses from nearby ships, who sighted a white glare between the foremast and “A” turret, quickly followed by two large explosions. The court found that at one, maybe two, of Vanguard’s magazines exploded. Additional supporting evidence came from debris, the explosion was so great that debris and remains showered nearby ships. One large steel plate, some six feet long, struck HMS Bellerophon and testing concluded the plate originated from an internal room to the centre of Vanguard.

Even with this intrinsic analysis, the inquiry could not establish in certainty why the blast occurred. The inquiry heard it was possible some of the cordite charges on board were past their listed safe life, and that a spontaneous detonation may have occurred, but neither theory could be proved. The most probable conclusion was that the initial fire or explosion took place in a 4-in shell magazine, and spread to a main magazine.

This was the final conclusion of the board, which attributed the loss to a cordite explosion and surmised this might have occurred because watertight doors which should have been closed were left open, allowing heat from the ship’s boilers to raise the temperature in a 4-in magazine and cause a fire.

However, for now at least, the cause of this disaster remains a mystery of Scapa Flow. The recoverable bodies were laid to rest at Lyness Royal Naval Cemetery, Hoy, where there is a memorial.