I read the collectable books, Ice Cold in Alex and the references to the film. One error in the film concerns the famous sand dune scene; reverse gear is not the lowest gear in an Austin K2Y Ambulance, first is. In the desert two-wheel-drive vehicles were preferred, (lower maintenance), with power take-off (PTO) air compressors for tyre inflation.

The four-wheel-drive K2Y ambulance in the film, has the PTO removed to give clearance for the front drive shaft, it is also a very early model Austin Ambulance, that has been rebuilt, due the later internal switches and CAV electrics (CAV electrics, L-WD-H1 headlights, L-WD-T1 rear light, axle flood light after c1942) and service modified can holders, to take Jerrycans. The ambulance rear body is also a mix, the rear canvas has been removed and is now covered with plywood. Headlights are 7in and should be 8in and just one on the L/H side(8in), or 7inand 8in dependant on the time line. Engine side covers are for an ATV. Obviously the Canadian Military Pattern C8A/X axles and transfer box are non standard. My brother’s K2Y Ambulance had the PTO modified in North Africa for what reason I do not know. Rupert Condick 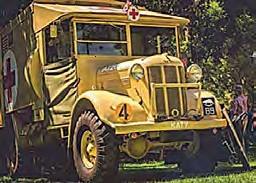