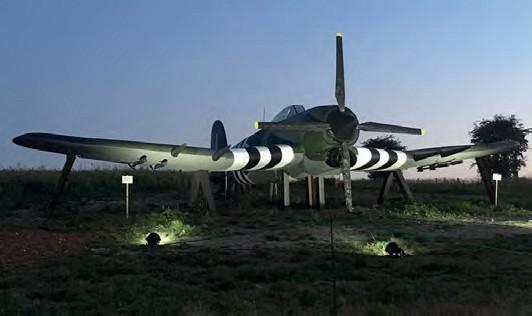 The Hawker Typhoon Ib model built by apprentices at the Chalke Valley History Festival, near Salisbury, Wiltshire.
(VIA QINETIQ)

A FULL-SIZE model of a Hawker Typhoon Ib built by QinetiQ’s apprentices was unveiled at the Chalke Valley History Festival near Salisbury, Wiltshire, on June 24. The project is part of QinetiQ’s approach to building its future capability, supporting apprentices to develop new skills and experiences, while helping to celebrate a ground-breaking aircraft at a world-renowned historical festival.

The model was built from a range of recyclable materials, including machined polystyrene, steel and modern building components, and has been painted to represent Typhoon Ib RB396. The real RB396 is currently being restored to flying condition. The project began last October with a presentation to the apprentices by historian, James Holland, and Sam Worthington-Leese who is the future pilot of RB396. The design and build phase took approximately eight months and the model was constructed in sections by apprentices with a range of local schools and cadets contributing to the project as a STEM (science, technology, engineering and maths) activity.