WE ARE sad to report the death in December of one of the last remaining women of the Battle of Britain – 98-year-old WAAF plotter Joan Fanshawe, writes Melody Foreman. Joan (maiden name Moxon) joined the Women’s Auxiliary Air Force at the age of 19, having abandoned her plans to study for a degree in social work. She told her father she was doing her duty as he had no sons to join the war effort. Very quickly her intelligence and quick mind impressed WAAF recruiters and she joined the Special 10 duty staff at RAF Uxbridge in West London. There, Joan and colleagues on designated shifts pinpointed RAF and enemy aircraft positions using flagged blocks and arrows on a huge plotting table and grid reference map of southern England.

Joan was on duty on 15 September 1940, the day the Battle of Britain reached its climax, with 1,500 aircraft fighting for control of the skies above London. In interviews she recalled the times Winston Churchill visited – she was on duty when he famously asked AVM Keith Park about committing his reserve aircraft: “How many more have you got?”. Park firmly replied: “None”. She said: “Apparently, it was in his car after he left us that he wrote his famous ‘never in the field of human conflict’ speech.”

After the Battle of Britain, she served at several RAF stations, and during D-Day she was based at Tangmere, West Sussex. By 1945 Joan had been promoted to section officer, but left the military when the war in Europe ended. By 1950 she had married Royal Navy officer Tom Fanshawe CBE DSC and lived in Petersfield until 1964, when they relocated to Stroud.

In recent years Joan was in great demand and appeared in documentaries about the war and made many special guest appearances. She died in hospital during a Christmas visit to her two daughters in Auckland, New Zealand on 21 December 2018, age 98. She is also survived by her son Lionel from Stroud. ∎ 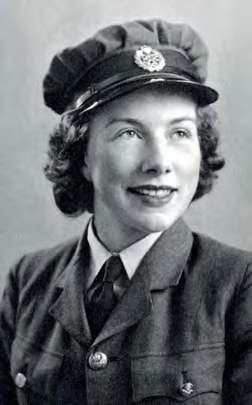