Joint Battle to Save War Wreck

Indonesia and Australia Work to Save HMAS Perth

DIVERS HAVE conducted a survey of HMAS Perth, amidst new fears she is being targeted by salvagers.

Renewed efforts to shield Perth come after Dutch authorities confirm their wrecks are victims of salavage and after three Japanese ships were targeted off Borneo.

Transferred to the Royal Australian Navy in 1939, HMAS Perth had an extraordinary career. She protected convoys to Malta, fought at Cape Matapan, deployed and evacuated troops from Greece, battled Vichy French forces off Syria and was involved in evacuations from Crete.

She sank on 1 March 1942 after being torpedoed in the Sunda Strait. The battle, in which the cruiser USS Houston and the destroyer HNLMS Evertsen were also lost, occurred when the Allied ships encountered a convoy of 60 troopships, with 20 escorting vessels.

Perth, as discovered in 2013, has already been affected by salvagers and this latest dive follows sonar scans by the Australian National Maritime Museum (ANMM) and the Indonesian National Research Centre of Archaeology (INRCA). However, this was inconclusive and it is hoped this dive will confirm the condition of the wreck, show the extent of corrosion, and identify if Perth has again been plundered.

Director of the ANMM, Kevin Sumption, stated: “We are very aware that there are concerns in the community and we are doing everything we can, working in close partnership with our Indonesian partners, to secure formal protection of the site.”

Although neither Australia nor Indonesia are signatories to UNESCO treaties protecting wrecks, and Perth is not a protected war grave, INRCA’s director stated: “[We] understand the significance of the Perth wreck, both historically … and [as] the final resting place for over 300 sailors”, and depending on the results of t he dive they said immediate action would be taken to secure the site.

The salvaging of wrecks in the region has sparked outrage, and assertions other vessels have vanished have added impetus. Sunken warships contain highlyvalued metals such as steel, brass and copper. Perth’s propellers for example, were phosphor bronze, valued at time of writing at £2,400 per ton. There are also fears fuel, live munitions and propellants have been exposed.

The HMAS Perth National Association said it is pleased by the news, but some historians are concerned any increased protections might come too late. 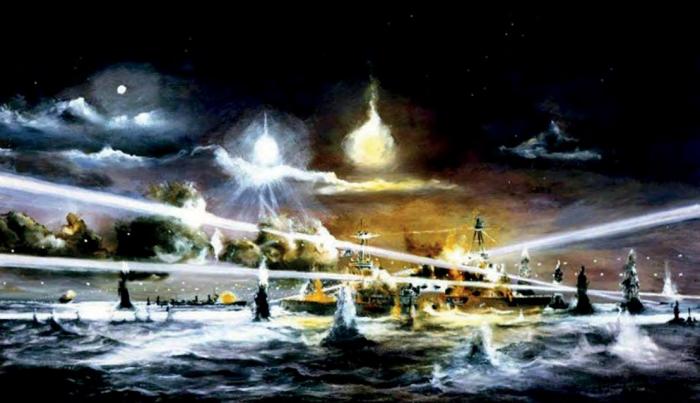 A dramatic painting by John Hamilton depicting the USS Houston in her final action. Her wreck was surveyed in February and was found to be mostly intact.

A former female pilot who served in the Air Transport Auxiliary and who flew 76 different types of aircraft from their factories to Royal Air Force bases during the Second World War has celebrated her 100th birthday. In recognition of her centenary, Mary Ellis was given the incredible opportunity to fly once more - piloting a two-seat Spitfire trainer. During her time in eith the Air Transport Auxiliary, Mrs Ellis found herself being shot at by a British AA gun which mistook her for the enemy, as well as being shadowed by a Luftwaffe pilot who declined to shoot when he realised the Spitfire was being flown by a woman. Britain at War magazine wish Mrs Ellis a very happy birthday and thank her for her service.

A First World War memorial plaque produced in bronze and commemorating the death of a 19-year-old soldier, Private George Cawood, of the Hampshire Regiment, has been returned to its rightful owners 33 years after it was unearthed in a garden in Farnham, Surrey. The plaque was found by David Brewer while he was renovating his house in 1984, but for decades it remained unclaimed. A recent search has seen the plaque returned to the fallen serviceman’s niece and nephew, Thelma Barker, aged 83, and Michael Cawood, 79 years of age. Poignantly, this turn of events coincides with the 100th anniversary of George Cawood’s death during the Mesopotamia Campaign. The plaque, known as a ‘Dead Man’s Penny’, was issued to the family of every serviceman killed in the Great War.