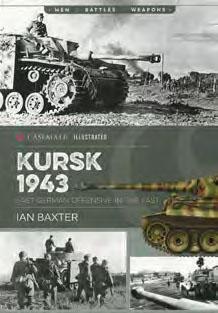 The battle of Kursk was the largest and perhaps most famous tank battle of World War Two. To this day it still captivates the imagination of armour enthusiasts and military historians. ‘Kursk 1943’ by author Ian Baxter uses rare photographs, maps and colour illustrations to tell the story of how the Wehrmacht and its elite Waffen-SS panzer divisions tried and failed to force their way through the strong defensive lines of the Soviets. The battle would mark the last German offensive in the East.

Verdict: The book forms part of Casemate’s Illustrated series and is divided into 10 chapters giving coverage of the build-up to the battle, how it played out and the aftermath. It’s a good read, well-illustrated and will make for a decent reference resource.