GROOVY GAZZA Productions and Vera Lynn tribute artiste, Lorrie Brown, recently visited the Dame Vera Lynn Children’s Charity in Sussex and presented a cheque for £10,000. The money had been collected while the company had been touring the UK with its 1940s-era shows. The cheque was received by Dame Vera’s daughter Virginia.

The charity offers support and therapy to children under the age of five and their families. Lorrie said: “While we were there, they showed us round to see the work they do. It was an amazing place and so rewarding seeing where the money raised is making a difference to these children lives.” Lorrie met her idol, Dame Vera Lynn, in 2015 after winning a national award for her tribute show. During their time together Lorrie asked about Dame Vera’s charity and offered to make collections for it at her shows. In 2017, on the 100th birthday of the forces’ sweetheart, Lorrie started a 50-date tour of a new show called ‘Sincerely Yours – The Vera Lynn Story’. As well as collecting money on the tour, Lorrie has raised funds for the charity at her solo shows and events around the UK. 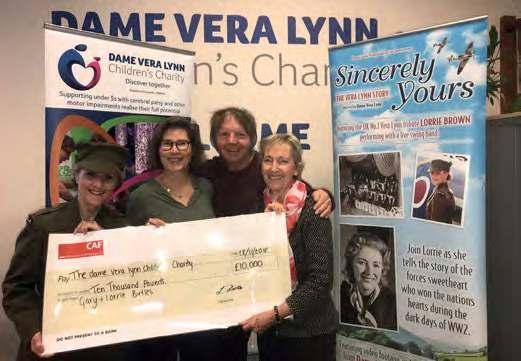