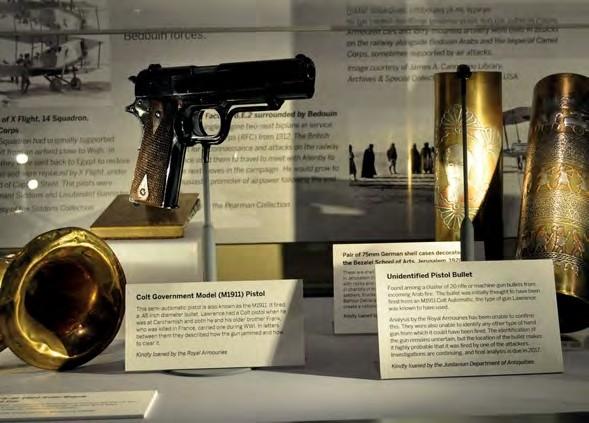 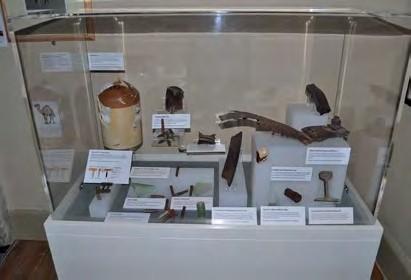 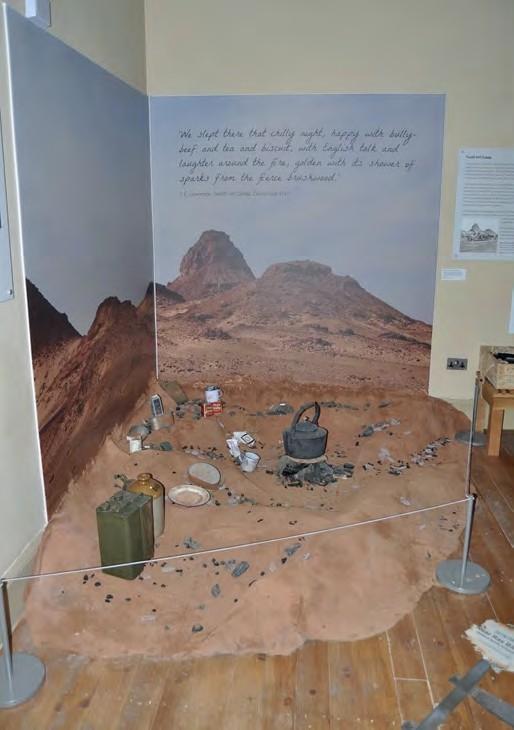 IN THE March 2017 issue of Britain at War we looked at the story behind the supposed ‘Lawrence of Arabia bullet’ and a new exhibition now features artefacts relating to T E Lawrence reports Mark Khan.

This exhibition is currently on display at the National Civil War Centre in Newark in Nottinghamshire. It features the story of the Great Arab Revolt as well as focussing on the story of T.E Lawrence, better known as Lawrence of Arabia. On display are a number of artefacts on loan from the Jordanian Department of Antiquities recovered during archaeological work by the Great Arab Revolt Project (GARP). Amongst these artefacts are those that were found near the site the train ambush carried out by Arab forces led by Lawrence. The ‘Lawrence’ bullet was recovered from here and is also on display. As well as from the ambush site items are also displayed from one of Lawrence’s camp sites. A cameo recreation of this campsite forms part of the exhibition. Lawrence is in many ways an emotive figure and has sometimes been called something of a charlatan and fantasist. In the history of the Desert Mounted Corps, Lieut Colonel The Honourable R.M.P Preston DSO perhaps provides an interesting description of the Arab forces under Lawrence’s leadership.

“Though intolerant of anything in the nature of discipline, and constantly at war amongst themselves, many Arab tribes of the Hedjaz had joined the standard of the old Sherif Hussein’s energetic son Feisal, that had carried on a successful guerilla warfare against scattered Turkish garrisons since June 1916. Their operations were directed especially against the Hedjaz Railway. Under the leadership of the daring and beloved Lawrence, train wrecking was elevated among the Arabs to the status of a national sport. Many wrecked trains yielded rich booty to the Sherif, and on one occasion included £20,000 in Turkish gold”.

Lawrence will always be an emotive, romantic and controversial figure - but this exhibition very concisely sets out his intriguing story.

The Exhibition is open daily 10am to 4pm. Entry is free with normal admission to the National Civil War Centre: £8 adults, £7 concessions and £3.50 children.

Seven stones have been erected alongside a memorial near Ypres in recognition of Welsh units which fought in the Great War. The memorial commemorates the fallen of Flanders, but the new additions, 10-tonne blocks sourced from a South Wales quarry, poignantly accompany the current marker.

A Great War VC has sold at auction for £240,000. The medal was awarded to George Sanders for his gallantry on the first day of the Somme, where, taking charge of an isolated party, held off German assaults for 36 hours - without food or water. This bravery saw Sanders become the first Leeds Territorial to earn the VC. Also sold was Sander’s MC, with the lot purchased for the Lord Ashcroft VC Collection.

The National Army Museum (NAM) have recently published a series of photographs depicting a Welsh soldier serving in Egypt after 100 years after they were taken. The images taken by Corporal Joseph Egerton’s document the fierce fighting during the campaign in the Sinai Peninsula, which culminated in an Allied Victory at the Battle of Rafa, on 9 January 1917. Corporal Egerton arrived in Egypt on 15 May 1916, and took numerous photographs of life in the various Egyptian communities he encountered, and of how the British handled logistics and the harsh conditions experienced in the desert. His story and images, as well as those of other serving from the Western Front to as far as Tsingtao, can be seen on the NAM’s fantastic commemorative website, ‘First World War in Focus’: http://ww1.nam.ac.uk/