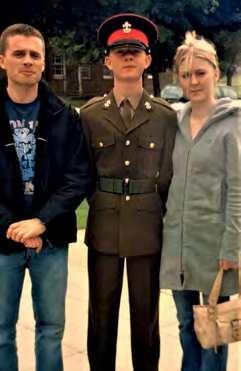 At the age of 16, John Devlin joined up to escape a culture of gangs and shootings in Liverpool. He found basic training tough, but not nearly as tough as the tour of Iraq that followed. John was part of a search team looking for Improvised Explosive Devices (IEDs) as part of a Quick Reaction Force.

He said: “We were sent to recover a broken-down vehicle when a sniper hit me, leaving me with a six-inch scar across my shoulder. An inch to the left, or a few inches lower, would have been fatal. I know I should’ve died – people started touching me for good luck, which was really annoying. It affected me badly and I went off the rails. Looking back now, I know it was a mental health disorder.”

After leaving the army, John admits his life was chaotic. He went through a string of different jobs and was unable to settle. Then he called the Royal British Legion.