LONDON BR IDGE IS DOWN

The many preparations for The Queen’s state funeral have received a level of strategic planning to rival any major military operation. Words by Christopher Joll 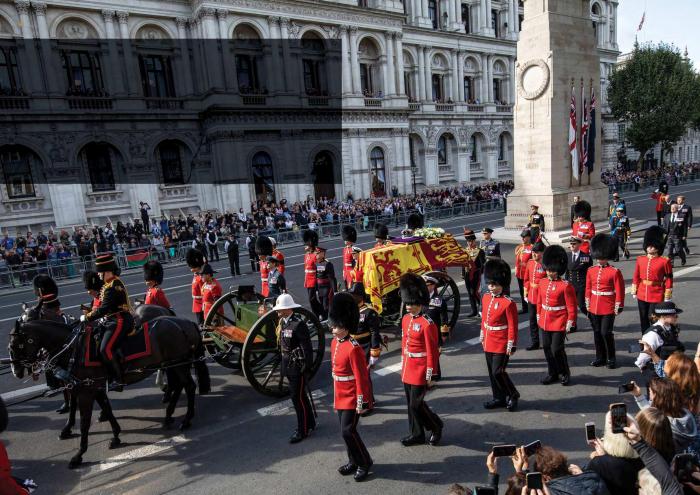 THE QUEEN'S COFFIN PASSES THE CENOTAPH ON ITS WAY TO WESTMINSTER HALL AHEAD OF THE LYING-IN-STATE. THE ROYAL PARTY (THE KING OBSCURED IN THIS IMAGE) FOLLOWED ON FOOT, ESCORTED BY A GUARD OF HONOUR
CPL TIM HAMMOND/ MOD

In ancient Egypt, work started on the excavation and decoration of a Pharaoh’s tomb the moment he came to the throne. The longer the pharaonic reign, the deeper and more elaborately decorated became the tomb. In more modern times, the preparation of obituaries and funerals is not so precipitate but, on the Boy Scout principle of ‘be prepared’, the planning for the funerals of prominent people starts long before any of them show signs of shuffling off this mortal coil. This is particularly true when it comes to senior members of the British Royal Family, whether they qualify for a full state funeral or the lesser ceremonial funeral.

The preparations for state and ceremonial funerals are the responsibility of a committee of the cabinet office that includes representatives of the Royal Household, the Earl Marshal’s office, HQ Household Division (which provides and co-ordinates the armed services element), the Metropolitan Police and the other emergency services. By custom, the planning document produced by this committee is given the name of a bridge. In the case of the death of Her Majesty Queen Elizabeth II, the codename for the preparations was Operation London Bridge. As the date of The Queen’s death could not be predicted, for the purposes of London Bridge, and like the 1944 invasion of Normandy, it was given the designation ‘D-Day’ – with the subsequent days leading up to the state funeral being D+1, D+2, etc.