Just outside Koekelare in northern Belgium, in the hamlet of Leugenboom, is a museum devoted to the Pommern Battery. The battery’s claim to fame is that it once held a massive gun; the 38cm Schnelladekanone (SK) L/45. Known to the Germans as Lange Max (Long Max) it was the biggest gun in the world in 1917. Chris Goss outlines the story behind some images he recently unearthed. 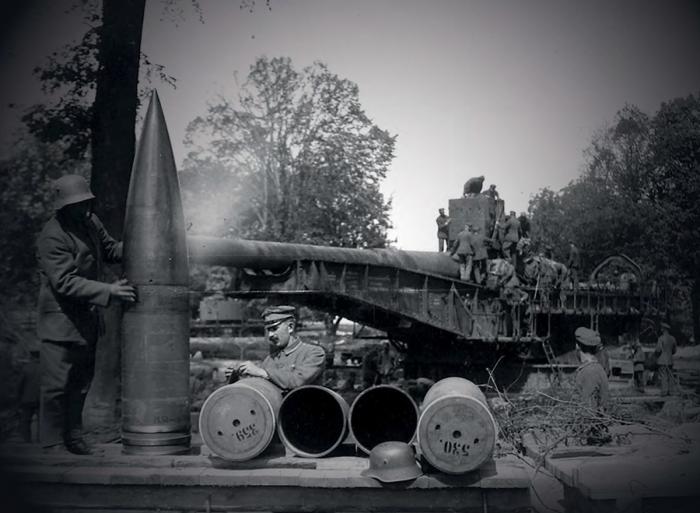 A German artilleryman gives scale to one of the shells used in the Long Max gun. In this case, however, the gun is a rail mounted version of the weapon.

Originally intended to be fitted to the German Bayern-class battleships, the Long Max gun was instead adapted to fire from land-based positions. The German gun manufacturer, Krupp, therefore adapted eight of these guns to be fired from either railway mountings or at fixed emplacements. Due to the recoil of this massive weapon, the railmounted guns only had an effective firing range of just over 22km, but if they were installed in a fixed location the gun could fire its 400kg shell just under 50km. The gun weighed just over 75 tons and had a barrel length of 52 feet. The length of the massive shell was something over six feet in length.