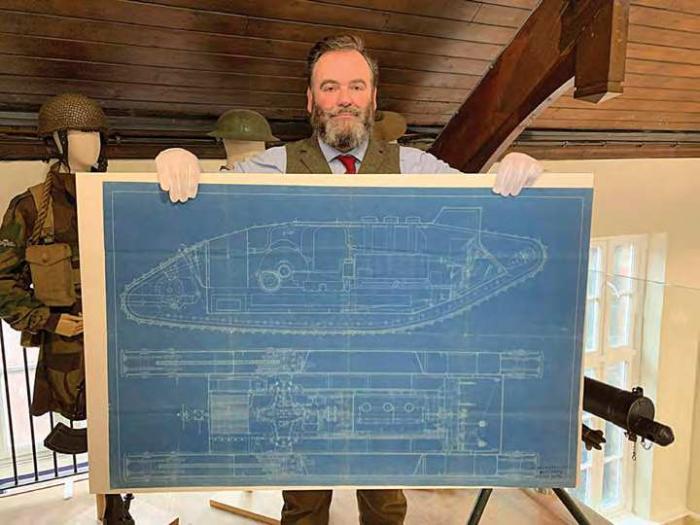 Auctioneer Paul Laidlaw with the blueprint of the first tank that was purchased for the Tank Museum in Bovington.
LAIDLAWAUCTIONEERS/BNPS

A blueprint for the first-ever tank has a new home at The Tank Museum in Bovington, UK. This comes more than 100 years after the battle of Flers-Courcelette, a sub battle within the wider Somme Offensive, which first saw the tank rumble into action on a battlefield. Thanks to the efforts of The Tank Museum and Tim Allan, formerly of the Royal Tank Regiment, the blueprint was bought at auction for £14,600.

The 44in by 28in document from May 1916 has been described as the tank’s ‘birth certificate’ and a defining document for the creation of modern warfare. Designed to help break the stalemate created by the trenches in World War One, an agricultural machinery company, William Foster & Co came up with the revolutionary design. In the patent, the Mark I tank is described as “transport vehicles propelled by an endless moving chain track” while being the shape of a “lozenge”.

After success with the initial prototypes such as ‘Little Willie’ and ‘Mother’, this was the first tank to be produced and see service in World War One. The first order was placed on February 12, 1916, and as the war progressed, William Foster & Co would build a further 37 ‘male’ Mark I tanks.