When the Sherwood Rangers crawled ashore on Gold Beach they were at the forefront – again. Historian James Holland tells John Ash about a regiment he believes is among ‘the greats’ 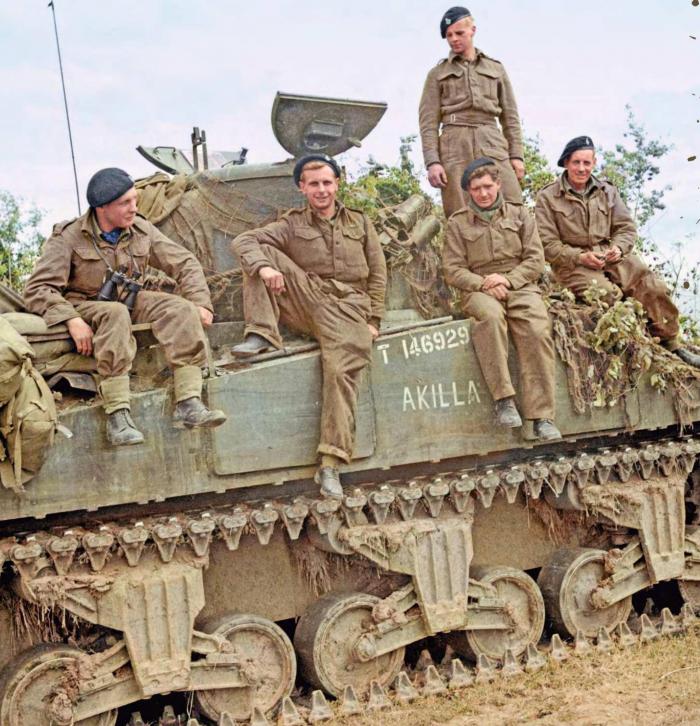 THE CREW OF ‘AKILLA’ (‘A’ SQN), AFTER DESTROYING FIVE GERMAN TANKS IN ONE DAY AT RAURAY, NORMANDY, JUNE 30, 1944. FROM LEFT TO RIGHT, SGT GEORGE DRING, TPRS HODKIN, DENTON AND BENNETT, AND L/CPL GOULD
ALL IMAGES FROM ‘BROTHERS IN ARMS’ UNLESS OTHERWISE NOTED

Ensconced just behind the lines in the leafy village of Karlshöfen, the Sherwood Rangers Yeomanry began May 5, 1945, preparing another advance. Many had just witnessed the horrors of ‘Little Belson’ – camp Stalag X-B –a few miles away. As shocked tankies did what they could to bring relief to the emaciated POWs, it reminded many of exactly why they were fighting.

But news of Germany’s surrender arrived that very evening. Palpable, if bittersweet relief. The regiment was then destined for service in the Far East, but this didn’t take place, perhaps the first time in the long war that fate gave it a break.

That quiet last day concealed little of the past six years, and the Sherwood Rangers had achieved much. Indeed, the regiment had earned an incredible 30 battle