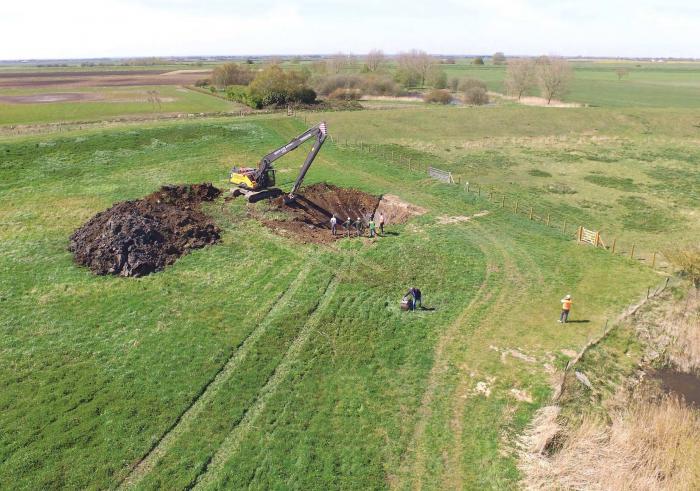 An aerial view of the excavation site of the first LVT-4 on the outskirts of Crowland, Lincolnshire

Daniel said the team behind the search and recovery of the first Buffalo, which included Crowland Cranes, Tears Recovery and North Level Drainage Board, had all indicated a willingness to get involved in the potential recovery of a second World War Two-era LVT-4 amphibious vehicle lost near the town of Crowland, Lincolnshire, during floods in 1947. The Buffaloes were brought in to help ferry equipment and supplies and to create a temporary flood defence barrier when an earthen wall broke and more than 30,000 acres of farmland was flooded. 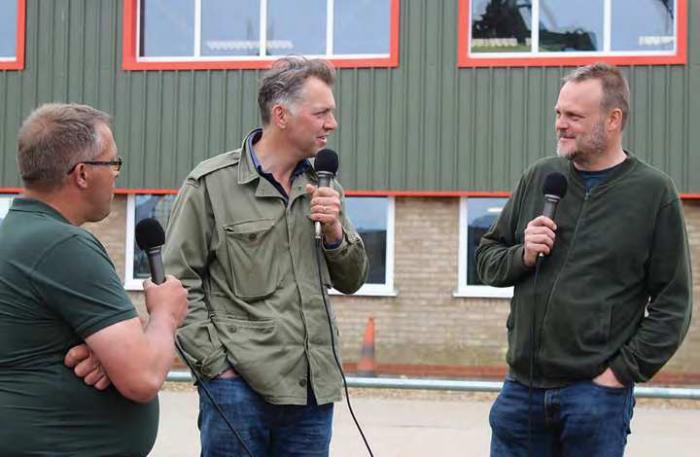 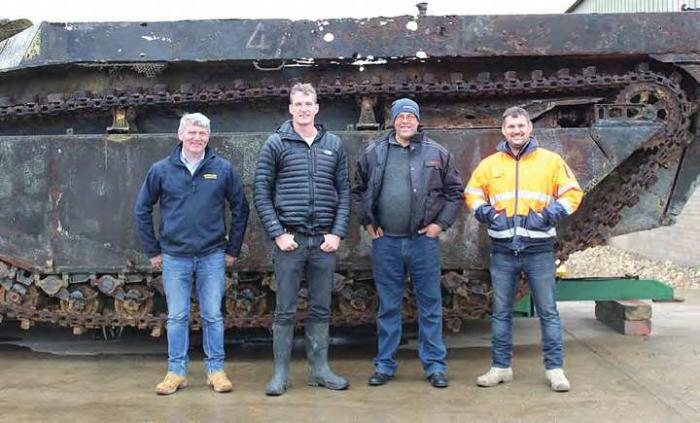 “We know from scans that there’s something under the ground, we just need to dig down to find out what it is,” said Daniel. “We’re going for another red mark in the same area outside the flood defence boundary and we’re going to see if we can hoist that one out in five days.”

Daniel said while the planned dig was scheduled for next year, he could not say exactly when. 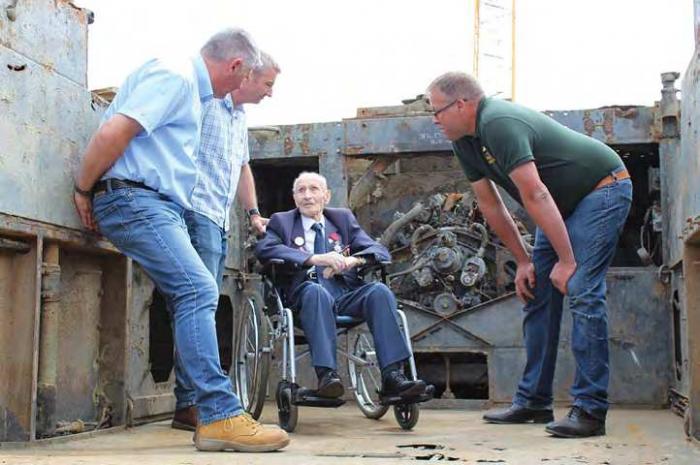 World War Two veteran Ernie Cavill paid a visit to the Buffalo. Ernie, 96, drove an LVT-4 during the Rhine Crossing in 1945

“We might as well look for another one and if we need bits to get this one restored and back in action we can. The site is not far off from where we recovered the first one and it’s at around the same depth (30ft). I can’t say exactly when we’ll start digging next year, it may be about the same time as the first, but it all depends on the weather really.”

Meanwhile, the CBLA has hosted several high-profile visitors who have descended on the town to view the recovered LVT-4 Water Buffalo. “One of the highlights was having World War Two veteran Ernie Covill come to visit,” said Daniel. “Ernie, who is 96, drove these during the Rhine Crossing so it was fantastic to have him here and listen to his experiences with them.” 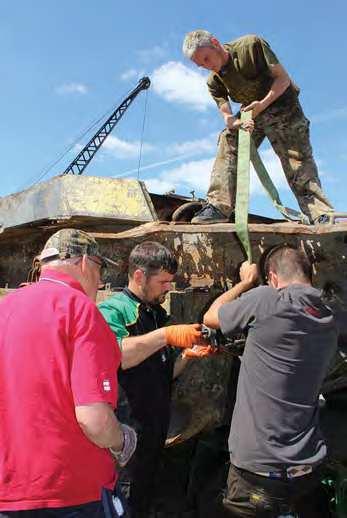 Ernie, from Boston, Lincolnshire, shared some of his experiences with the team. “He thought it was in immaculate condition for its age and was telling us how to operate it and how to drive it and how to approach a riverbank if we ever getting it running,” said Daniel. “He said not to go straight at the bank, but that you had to approach at a slight angle and keep an eye on the tide in case it started to push you around.”

Daniel said Ernie became “quite emotional” during the visit as seeing the Buffalo had brought back “loads and loads of memories for him – good and bad”. “He recalled hearing what sounded like little, tiny whistles going over the top, which was bullets flying over their heads. He said they also heard this continuous ‘ting, ting, ting’ sound of bullets hitting the armoured plating. 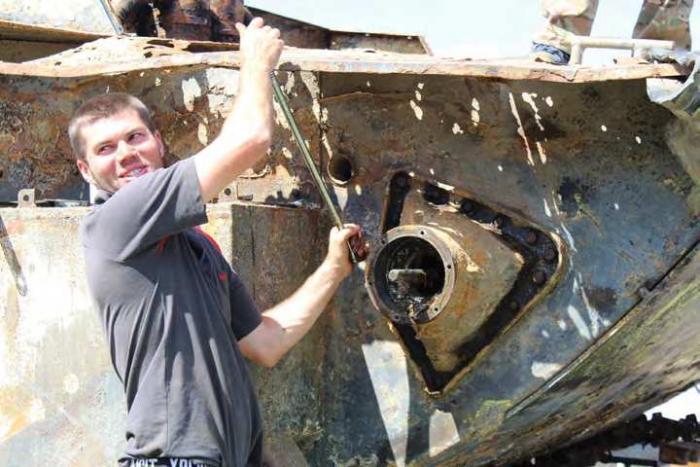 “Hearing these stories from a veteran who operated vehicles like this during the war really brought things home to all the volunteers who listened to Ernie talk about what it was like in 1945 to be crossing the Rhine.”

Ernie said the LVT-4 was a notable improvement on previous versions because the ramp was moved to the back of the vehicle. “He told us earlier models had the engine at the back, so everyone had to bail over the sides and ended getting shot at, while the LVT-4 allowed everyone some degree of safety,” explained Daniel. “The ramp would drop, and the troops would disembark from the rear of the vehicle. The only criticism he had was the manual winding mechanism for the ramp and said it if was electric it would have speeded up the process a lot more.” 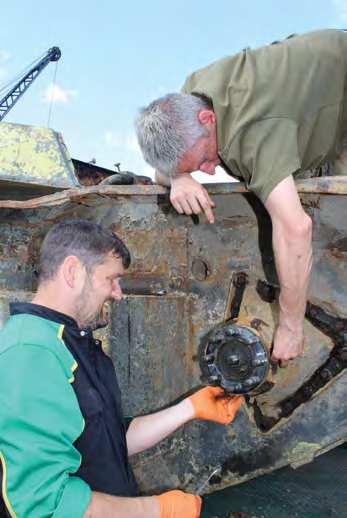 “He came to do a bit for his History Hits online show,” said Daniel. “He couldn’t believe that everything was still turning and spinning and the overall condition of the Buffalo, considering it had been underground for 74 years. We also took him to the site where it was recovered from, and he was very impressed with what we had done.”

Comedian Al Murray and historian James Holland also visited to record an episode for their podcast.

As for cleaning and restoration work, Daniel said things had been progressing well. “The tracks and sprockets have been removed and (at the time of writing) we’re taking the final bits off to get the gearbox out. David Brown Gear Systems from Huddersfield has offered to recon the gearbox for us for nothing.

“We also have two engines coming from America as a local farmer by the name of Michael Sly is keen to get this old girl running again – even if it’s just on tick over. So, when David Brown offered to do the gearbox, a decision was taken to source an engine so it’s looking increasingly likely that Buffalo 47 will one day be running under its own steam again.

“But there’s still a lot of work to be done to get there. We’re struggling to find a company that will make links for the tracks, so any help would be greatly appreciated. We’ve had a number of families get in touch regarding family members who served with the Buffaloes during the war but have not discovered any more on this one’s history as yet.

“Our fund-raising efforts are also not going as well as hoped, so any help in this regard would also be greatly appreciated.”

To make a donation towards the restoration of the Crowland Buffalo and a museum dedicated to the 1947 floods, visit https://gofund.me/dff085a3