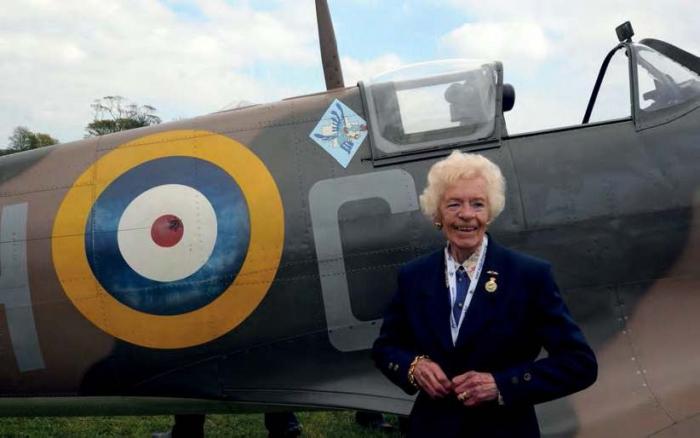 Mary with her favourite aircraft type - the Spitfire - in 2012.
(MELODY FOREMAN)

MARY ELLIS’ wartime story about the day she landed a Wellington bomber is legendary, writes Melody Foreman. “Where’s the pilot?” demanded an amazed RAF ground crew. “I AM the pilot!” replied Air Transport Auxiliary First Officer Mary before the men searched the aircraft and discovered she was telling the truth. This is just one of many illuminating tales Mary shared in her memoir A Spitfire Girl [co-written by Melody Foreman].

Mary was born in Leafield, Oxfordshire, in 1917. She joined the ATA in October 1941 after hearing a BBC appeal for women pilots. Her job, along with that of the hundreds of men who were part of the notable civilian organisation, was to fly military aircraft from factories and maintenance units to RAF airfields throughout Britain.

Mary’s tally of Spitfires, always her favourite aircraft, the Mk.V in particular, totalled 400 by the end of the war. Her logbook also notes 76 aircraft types, including twinengine bombers, fighter aircraft and seaplanes, along them her least favourite, the Walrus. She was one of just 168 women pilots of the ATA.

From 1950 to 1970 she ran Sandown Airport near her home on the Isle of Wight and as managing director became Europe’s first ever female Air Commandant. She remained passionate about vintage aviation for the rest of her life. Mary met her husband, the aviator Don Ellis OBE, at Sandown.

Right up until her death Mary was still enjoying a busy life as Commodore of the Air Transport Auxiliary Association and in our last phone call, she was keen to add another chapter to our book about her latest adventures, which included meeting the Prime Minister Theresa May at the RAF100 celebrations and appearing in a new film about the Spitfire.